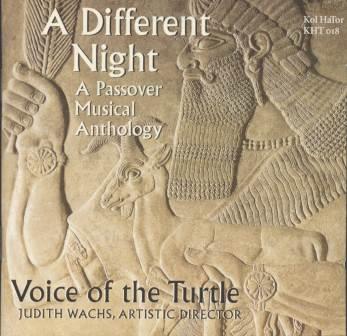 Because the holiday is of major importance to Jews all over the world, it is bountifully endowed
with a fascinating panorama of music. Voice of the Turtle has chosen a selection which reflects and explores the vast cultural wealth of Jewish life preserved within communities dispersed over centuries.

Had gadya is a cumulative table song with an improbable tale, which appeared in the Ashkenazi Haggadah around the 16th century. Its function and meaning are the subject of continuing debate. It is sometimes interpreted as an allegorical recounting of the fate of historical enemies of the Jewish people.
The text closely follows a 15th century German folk song, which is said to have derived from a French folk song. It seems to have appeared among the Ashkenazi Jews (Northern and Eastern Europe) in Aramaic and Hebrew, and later, at varying times in other communities, in other languages. As one can hear from this recording, it is often translated, reconfigured, and reinterpreted according to the traditions, the conditions and perspective of the community who sings it.

The musical arrangements by Voice of the Turtle are the result of a collaboration among the four members of the group. Whenever possible, the group learns the melody and words from original field recordings.

Learn more about the band
Buy the CD