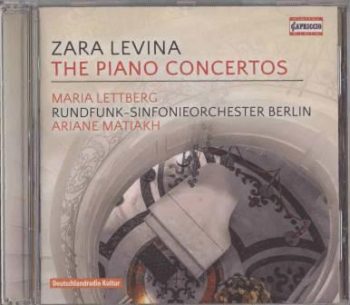 Zara Alexandrovna Levina lived all her life under the ideological pressure, continuous and frightful, of the State censorship, especially applied by the RAPM (Russian Association of Proletarian Musicians) in the 1920’s and 1930’s.
Nevertheless, Zara Levina succeeded brilliantly in keeping her own musical genius facing such difficulties.

30 years separate the composition of these 2 piano-concertos

These two works are different, and at the same time very linked. They can be enrooted in tradition, but not eclectic. It is often surprising, whether it’s the harmony or the theme, the tone… But violence is completely absent in the composition.

Nevertheless, who listens to these 2 concertos will think of them as harmonically and melodically linked…

Maria Lettberg, piano
Since her beginning with the Concerto n°1 by Peter Tchaïkovsky with the symphonic orchestra of the Swedish radio, in addition to the traditional repertoire, Maria Lettberg is fascinated in rediscovering the treasures of the past.
Native of Riga, she lives now in Berlin and is liked by the public and international critics, especially for her performances of Russian and Scandinavian music.
With the two Concertos for piano by Zara Levina, Maria Lettberg continues her discoveries of difficult pieces in its composition and piano technique.
Her first recording.

Ariane Matiakh, conductor
Since the replacement of James Conlon in Chostakovitch’s 7th Symphony in 2006 at the National Orchestra of Montpellier, Ariane Matiakh has an international profile of chief conductor in the symphonic repertoire and in the opera and ballet.
Ariane Matiakh Studied the orchestra conducting with Leopold Hager and Yuji Yuasa in Vienna and participated to master classes with Seiji Ozawa, before receiving the Revelation prize to the “Victoires de la Musique Classique” in 2009, and winner of the 1st edition of the “ADAMI” contest. She also was finalist to the Donatella Flick contest in London in 2008.

Symphonic Orchestra of the Radio of Berlin (RSB)
The Symphonic Orchestra of the Radio of Berlin (RundfunkSinfonieorchester Berlin, RSB) was founded at the beginning of the radio broadcasting in 1923. The orchestra’s musical directors like Sergiu Celibidache, Eugen Jochum and Rafael Frühbeck de Burgos all helped in creating the sound of the orchestra. Since its creation, many important composers, such as Sergey Prokofiev, Richard Strauss, Igor Stravinsky and Jörg Widmann conducted the orchestra, as well as young promising conductors like Andris Nelsons, Vasily Petrenko, Jakub Hrusa, Lahav Shani and Omer Meir Wellber.

Listen to the radio podcast hosted by Laure Schnapper about Zara Levina “Ariane Matiakh, conductor, for her new CD Concertos for piano by Zara Levina