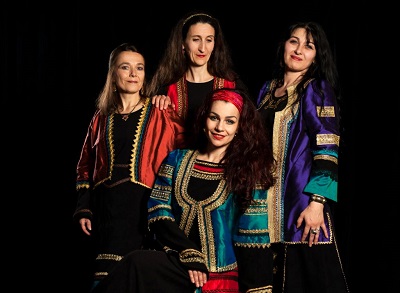 Two true Bulgarians, living in their adoptive city Lyon, and two Lyonnaises Bulgarian in the soul, came together to evoke traditions, nostalgic memories and love.

Alternatly melancholic and playful, these four women vary subtly the angelic purity of their voices and the fiery rhythms of melodies from the rich Bulgarian repertoire performing songs filled with natural sounds vibrating with the vocal chanting tradition.

Four female voices, with fascinating voice tonalities interweaving, flirting the high notes or sliding to the low notes in order to accompany the audience in a captivating, colorful foreign musical universe.

BALKANES generously share stories that juggle between grief and humor, adjusting tradition to their vision and musical identity. Emotions and humor cross the boarders and magic settles among the audience from the very first song…