Yerushe is the 7th album in the Discovery collection published by the European Institute for Jewish Music.

The band Yerushe, which means heritage in Yiddish is formed by Eléonore Biezunski (vocals, violin), Stephen Harrison (double bass and banjo), Piotr Odrekhivskyy (accordion), and Michel Schick (clarinets, transverse flute and ukulele).
This album revives Yiddish songs that were sleeping in the European and American archives. 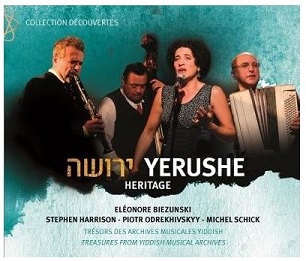