A great opportunity to celebrate the end of Yom Kippur together. 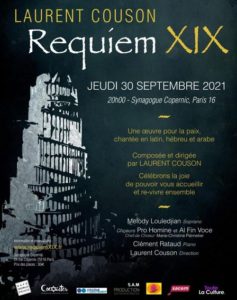 An exceptional work for rebirth and peace sung for the first time in three languages (Latin, Hebrew and literary Arabic) inspired by the theme of the Tower of Babel. The world after sung by 50 choristers, solo soprano and instrumental ensemble in an original creation by composer Laurent Couson.

In view of the success of the world premiere in the presence of the Mayor, the Ambassadors of Lebanon and Israel, representatives of the three cultures, including Philippe Haddad, Rabbi, Hassen Chalghoumi, Imam of Drancy, Thierry Vernet, delegate of the Archbishop for relations with Judaism, Marek Halter … These same personalities have confirmed their desire to speak again in advance of the concert event at the synagogue Copernic.