Hélène Engel presents the CD Zol Zayn by the band Shpilkes released in 2014.
Shpilkes (in Yiddish : needles) was created in 2010, under the direction of the singer and fiddler Éléonore Biezunski. It builds an original and misknowned repertoire from East European Jewish tunes.
Slowly and delicately, Shpilkes stitches back a cloth of popular music, to dance, to laugh, to drink and to cry, putting pieces together, of a culture which never stops recreating itself. Carried by the expressive and authentic voice of Eléonore Biezunski, the band invites to a dancing and poetic journey through Central and Eastern Europe… 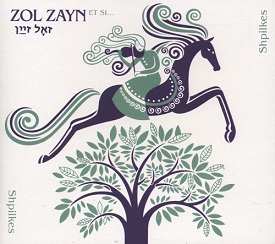