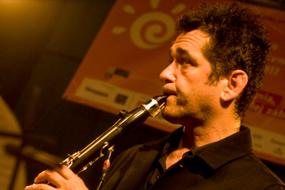 He has worked as Music Co-ordinator for KlezKamp, KlezFest London and taught at KlezFest St Petersburg, KlezFest Ukraine and KlezKanada. He is one of the world’s leading players of traditional East European Klezmer Clarinet style, and he has worked and toured throughout Britain and Europe with his own quartet, with his wife Polina, Budowitz, Frank London’s Klezmer Brass Allstars and the Burning Bush.