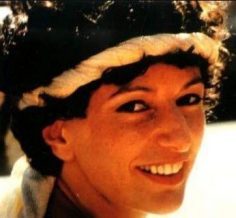 Danielle Messia, born Mashiah, on the October 27, 1956 in Tel Aviv-Jaffa in Israel, was an author, composer and singer.

She was 3 years old when her parents settled down in France in the Paris district in 1958. Danielle was raised with her sister Cécile. Her father left for the USA in 1960, without leaving any address.

In the beginning of the 1970’s, she joined the folk band « Grattons Labeur » which toured in the Orléans region and in several cafés-cabarets of Bretagne with Gérard Blanchard. At the same time Danielle took time history classes in the university. The band released a disc in 1970, Le Bal des sorciers, published by the music label Morice Bénin, ABA.

She then started a solo career and left with her guitar to discover Austria, Romania and Italy. 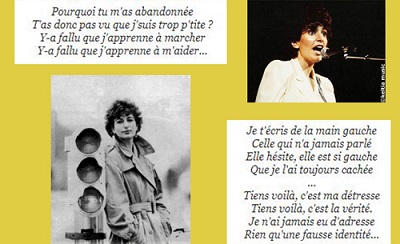 Back in Paris at the end of 1978, she lived in rue de Paradis in a small chambre de bonne. She sang in the streets, in the subway, and in the youth and culture homes.
She got hired at the end of 1978, at the Écume for the end of year celebrations, where she made an important meeting, with Eddy Schaff who worked with her on her voice, to record a disc. She later said « He taught me to sing, […] gave me confidence in myself ».

Jean Lavigne recorded her first disc, of which 1000 copies were released, but never broadcast. She then invited 200 show-business figures, but only two journalists came, Jacques Vassal and Maurice Marouani, who talked about her to Barclay music label.

Her first disc Il fait soleil was released in 1981. Her second album De la main gauche was released the next year, and on the same year, she joined her sister who lived in California. In October 1982, she performed in the Olympia concert hall as part of the « Olympiades de la chanson ».
In 1984, she left Barclay and signed with Wea for a third album, called Carnaval which was released in 1985. She participated to the Printemps de Bourges festival and the Équinoxe festival in Bretagne.

One year later, her friends, Gérard Classe and Georges Nawrocki decided to release the souvenir album Les Mots with songs taken from the 1979 album which was never released, and from studio demos. This album received the award of the Académie Charles Cros « in Memoriam ».

Jean-Jacques Goldman dedicated to her his song Famille, and he also wrote for her the music of the song Le temps des enfants.

Consult our archives about Danielle Messia