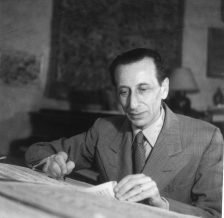 Born in Łódź, the 11th of June 1897, in a Jewish bourgeois family, cultivated and music loving, Alexandre Tansman started composing music at a very young age « in the way of Chopin ». He studied piano, harmony and solfeggio at the same time. But it was in Warsaw that Tansman affirmed his vocation of composer, encouraged by some, but discouraged by Polish critics. Indeed, ignoring the Western musical trends of the time, he used polytonal harmonies, chord resolutions out of schemas of functional harmony. Thanks to a composing contest organized by Poland, which became independent again, the young man won the three first awards under three different pen names !

At the end of 1919, he settled down in Paris where he met the most important music figures of the time : Ravel, Bartók, Gershwin, Honegger, Milhaud, Prokofiev, Roussel, Schoenberg, Stravinsky, etc. His works were quickly conducted and performed in Paris as well as in all Europe and the United States. In the 1930’s, he was part of a group called « l’École de Paris » with composers originating like him from Eastern Europe : Tcherepnine, Martinu, Mihalovici, Harsanyi.

Between 1932 and 1933, he started a world tour which brought him to the United States, Hawai, Japan, China, Philippines, Singapour, Indonesia (Java, Bali and Sumatra), Ceylan, India, Egypt, Italy and the Balearics.

While the whole world applauded him as a Polish composer, Tansman harmonized in 1933 a series of twelve Hebraic Songs, his first work of real Jewish inspiration. Tansman had known a young Yemenite singer who sang to him beautiful Jewish tunes from Yemen in the purest Jewish tradition. This music score opened a serie of works in which the composer wished to highlight the specific and nevertheless universal qualities of Judaism, under the aspect of its philosophical contribution to humanity.

In 1941, thanks to the support of a commitee organized by Charlie Chaplin, Arturo Toscanini, Serge Koussevitzky, Eugene Ormandy and Jascha Heifetz, Alexandre Tansman left France for the United States, where he stayed until 1946.

In 1950, Tansman composed what will maybe be his most important work, the oratorio « Isaïe, the Prophet » dedicated to the memory of six million Jews exterminated during World War II and to the birth of the State of Israel.

In 1953, the death of his second wife, Colette Cras, with whom he had two daughters, Mireille and Mariannne, was the hardest loss in his life. At the time he started to write his memoirs, published in 2013 at the Editions Aedam Musicae under the title « Alexandre Tansman, Regards en arrière : Itinéraire d’un musicien cosmopolite au XXe siècle ».

His creativity was however always increasingly productive and his works testify to a great maturity : such as his operas « The Oath » and « Sabbataï Zevi, the false prophet ». He continued to prefer symphonic music to chamber music.

In the 1970’s, France qualified his music as too « neo-classical », isolated him from musical life, as well as other composers of his generation. However, little by little, Poland discovered him. After more or less 50 years, Tansman came back to his native country. He was acclaimed as the « child prodigy of Łódź» ; festivals, articles, interviews, were dedicated to him. Moreover, the first Polish biography, written by Janusz Cegiella, in collaboration with the composer, gave to him the popularity to his fellow countrymen he always dreamed of. One of his latest works is a mazurka for guitar, Hommage to Lech Walesa (1982). France names him Commander of Arts and letters in 1986. Alexandre Tansman however didn’t live long enough to see his native country independant, and received, post-mortem the nomination to « Doctor honoris causa of the musical academy of Łódź ».
He died in Paris on November 15, 1986.

Since 1996, an Alexandre Tansman contest is organized in his native town in November every two years.

The artistic heritage of Tansman includes over 300 works for various instrumental and vocal ensembles, among them 7 operas, 11 ballets, 6 oratorios, 80 orchestral scores (of which 9 Symphonies), many works for chamber music, 8 String Quartets, 8 Concerti for all instruments, around a hundred pages for piano, many stage and film music, and many pieces intended for children. Around thirty of his works are directly inspired by Jewish tradition.

Virtual exhibition, by Bettina Sadoux, in collaboration with Mireille Tansman-Zanuttini

Look at our archives on Alexandre Tansman