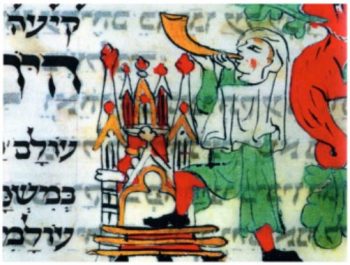 There are many testimonies concerning the attitude of rabbis toward music, scattered in the talmudic, midrashic and rabbinic literature.
A careful attitude, and sometimes a radical opposition to any musical event, is noticed in the beginnings of the talmudic era. The main reason for this opposition is the mourning following the destruction of the Temple of Israel in the year 70 of the Christian era. Although it is probable that this opposition reflects the feelings of the Jewish authorities at the time of the Tannaim, close in time to the event that caused the grief, and tht we can trace back the origin of this opposition to before this event, it remains that the memoray of this national grief appears throughout all the Middle Ages until the modern era as a reason to restrict the musical practice.
Thus we find this motivation in the Maimonides Code (1170-80), and later, in the last accepted rabbinic codification as a rule in Judaism in all the diaspora, the Shulhan ‘arûk by Joseph Caro, dating from the middle of the 16th century. We can see an intensification of this theme in the restrictions concerning musical practice periodically in certain Jewish centers, when a local disaster occured. It is in particular the case in Eastern Europe after the terrible massacres of Jews by Chief cosaque Chmielnicki in 1648.

Besides these reasons, linked to historical events, the main doctrine concerning music is established in function of ethical considerations. The considerations have by the way very few similarities with the Greek doctrine of Ethos, although it was transplanted, through Arab theoricians, in many writings by Jews in the Middle Ages, among who rabbinic authorities. The talmudic doctrine, which appears through sayings of the thinkers of the Talmud and Midrash, concerns almost exclusively the functional specificity of music ; only a music serving a religious function is authorized and encouraged ; certain categories of singing for work are tolerated, whereas others, that are judged indecent, are forbidden, as well as, in various degrees, any profane musical practice of which the frivolous and sensual character is judged incompatible with the needs of a holy life that should have every Jew.
To this fundamental division in religious music – the only one accepted – and profane music, forbidden in principle, various tones appear: thus, in the profane practice, instrumental music seems more severely criticized than vocal music; also, rabbinic authorities, particularly attentive to the dangers of debauchery during banquets, scream against feminine singing.

Rabbinic sources posterior to the Talmud only confirm and precise this functional division of music if it serves a religious or profane goal, without paying attention to the musical “language”. A decisive authority, the important talmudic compendium of the North African Isaac Alfasi (1013-1103), is granted for the decisions taken by the leaders of Babylonian academies. This official position, acknowledging music to ” sing the praises ” of God would become a law and would be often opposed after by the defenders of religious musical practice to the ” bigot ” critics of this practice.
Maimonides (1135-1204), whom the negative attitude toward the musical practice has often been noticed, doesn’t oppose, in his famous Responsum to music – in which he quotes Alfasi – a religious musical practice. He indicates it clearly in the beginning of his answer to the question if it allowed to sing Arabic songs and to practice music in general: radical prohibition of all musical practice, be it vocal or instrumental, ” except for prayer [where music] helps and elevates the soul to joy and sadness “. If in his code mishneh tôrah, Maimonides evokes the grief for the destruction of the Temple, no reference is made to it. The reason he gave for his opposition to profane music is the requirement for Israel to be a ” holy nation “. All activity which do not go in this direction is to be banned. The shades of appreciation for various forms of musical practice that we already noted in talmudic literature find themselves here, but there is still no reference to an intern distinction concerning the musical ” language “.
After having recalled that there are no differences between the use of the Hebrew language or Arabic language, and that the only criteria setting the eligibility or prohibition of the musical practice is the function (religious or profane) of this practice, ” the goal we wish to reach “, Maimonides numbered the five prohibitions related to the profane musical practice, and that we should understand as from the lowest to the highest importance :
1. the profane text in itself ;
2. vocal singing ;
3. the latter with an instrumental accompaniment ;
4. the latter with the tasting of wine ;
5. feminine singing.

According to certain regions, times and life conditions dominating in various Jewish centers, a more or less large interpretation would be given to the notions of ” religious music ” and ” profane music “.
In general, we can notice that the practice of religious music, allowed by the rabbis, was never confined just to liturgy. In all celebrations and banquets related to a religious event (” se‘uddat miswah “), in particular for a circumcision, a wedding or Purim celebration, music was allowed and encouraged. As all cultural event in a Jewish realm, to be legitimate, needed necessarily a religious character, the absence of strict rabbinic rules gave to the music lovers of the various Jewish communities the opportunity to play music according to their tastes and musical means that they had. It is interesting to notice also this absence of rules concerning the moment, during a liturgical service, of what we name ” music “, and that designates, according to regions and times, the stylized chanting of the cantor, the use of a choir, or instruments, of art music in definite.

We should also notice a general reason which pushed the rabbis to have a careful attitude toward musical practice. The concern of preserving any Jewish person to a contagion of a ” stranger’s cult ” (‘avodah zarah) practice, got amplified in rabbinic legislation with the prohibition of doing the ” gentile’s custom ” (huqqat hag-gôy). The assimilation to the music of this huqqat hag-gôy is mostly notable in the Christian western world, where the evolution of music was closely related to the Church in the Middle Ages. We see an example of this attitude, which doesn’t disavows ” music ” for itself, but that expresses a fear to favor or approach the ” stranger’s cult “, in the responsum of a German talmudist, Israël Isserlein (1390-1460) : consulted to know if the selling of ” improper ” books to a clerk was allowed, Isserlein answered : if the Jewish vendor knows that it is ” one of their cult books used for singing and celebrating the stranger’s cult “, this selling is illegal; if, on an other hand, the vendor ignores the nature of the book, the operation is allowed as it is probable – and probability is enough in such a case – that it is a work belonging to the ” majority of their books ” which are books about jurisprudence, medicine, mathematics or music.
We see that the extreme precaution taken to avoid bringing a tiny sprinkle of Jewishness in the Christian cult, of which the evocation is automatically associated with the musical practice of a ” stranger’s cult “, is evidently not related with a hate for music, as this same source declares legitimate the selling of a music book, without any mention of a ” stranger’s cult “.
This rabbinic preoccupation to preserve as much as possible Judaism of any contact with the ” stranger’s cult ” is much more expressed when it is linked to fight against borrowings of foreign melodies, in particular ecclesiastical, to serve the synagogue service. We find the proof of such practices which creates the protests of an author of the « Book of the Righteous », in the 13th century in the Rhineland countries. It is also one of the most important subjects mentioned in literature in the 17th and 18th centuries.