Naftule Brandwein (1889–1963) was born in the small town called Przemyslany in Poland, not far from Lvov, belonging to Austrian Galicia at the time, and later returned to Poland in 1918. His father, Pesakh Brandwein, was a badkhn (wedding jester), violonist, and leader of his family kapelye (orchestra), that toured in all Eastern Galicia. Naftule was one of the 14 children his father had with four different wives. He had nine brothers and four sisters, among them Henrietta, his twin sister. In 1919, all excepts two of his brothers emigrated in America. The two brothers who stayed were the eldest, Eli, and the youngest, Tzvi-Hirsch (both were later killed by the nazis). Tzvi-Hirsch’s son, Leopold Kozlowski, was the leader of the resurrection of klezmer music in Eastern and Central Europe since the 1990’s.

One can hear Brandwein in many Yiddish classic recordings from the golden time of popular Yiddish music (1915-1935) and specifically in those by Abe Schwartz (1881-1960). In the background of these recordings, one can hear Naftule Brandwein, this incredible virtuoso, playing on his E flat clarinet. 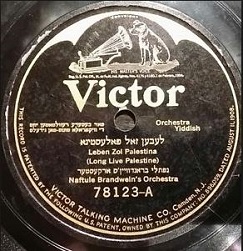 One of the recordings produced by Schwartz on which played Brandwein was “Firn Di Mekhutonim Aheym” (“Escorting the in-laws back home”). This gasn nign (street song), with its continuous sostenuto and its solo of legato clarinet, show the incredible talents of Brandwein. His improvisation, his dexterity, his quickly played music scales, his air blowing management, his glissando and his knaytches make it one of the most heard and played recordings since the revival of klezmer music in the 1980’s. This is particularly the case for the orchestras who perform the repertoire of the small bands from the 1920’s and 1930’s. 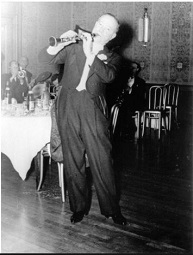 Brandwein was known not only for his virtuosity on the clarinet, but also for his impetuous and no-limits life. He liked women and alcohol. One used to say that if you hire Brandwein for an evening and wish him to be happy and play all night long, you have to give him enough alcohol and a woman. He was also known to be the favorite klezmer musician of the Jewish Murder Gang Inc. He loved to spice up his concerts by pulling down his pants or by wearing a neon sign on his chest saying “The Naftule Brandwein Orchestra”, or in the costume of Uncle Sam with Christmas lights, with which he once missed electrocuting himself. His public or private transgressions did not let him stay with one band, because his colleagues were quickly infuriated by his attitude. He was nevertheless a regular musician of the Joseph Cherniavsky Yiddish-American Jazz Band and Abe Schwartz’s orchestra. 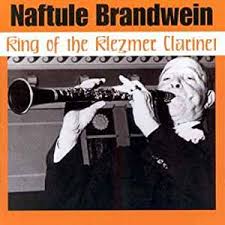 From 1922 to 1927, Brandwein made many recordings and created the typical sound of solo American Jewish klezmer clarinet players. Then he stopped recording. His lifestyle negatively affected his health and relationships with the other musicians, but he kept working by doing small gigs for private occasions, weddings, or hotel special evenings. Finally, in 1941, Brandwein went into a recording studio one last time under the Anglicised name “Nifty” Brandwein. The recordings, – “Klayne Princesin” (“Little Princess”), “Naftule’s Freylekhs,” “Freylekher Yontef” (“Joyous celebrations “) and “Nifty’s Eygene” (“What belongs to Nifty”)-, show the evolution of Brandwein during these 14 years of absence from the studio. His virtuosity was no longer the core of his recordings. Instead, he exhibits in a calmer and more introspective tone.

Naftule was no longer alive no more to witness the revival of klezmer music from the middle of the 1970’s. But his influence has not vanished: a new generation of klezmer musicians point to him as their main inspiration.

Listen to the playlist dedicated to