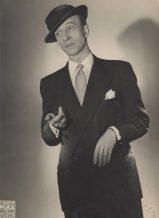 Dave Cash, whose real name was Ludwig (Louis) Slomniker, was born on October 3, 1910 from the union of Zygmunt and Amalia Slomniker in the Polish city of Lemberg in Galicia (Lwow), now Lviv and Ukrainian. If it is sometimes said that Dave Cash was of Rumanian origin, it was perhaps because he had invented a past that evoked the nostalgia of a peaceful and prosperous life as expressed in the song “Rumania, Rumania”. He studied theater and dancing in Lwow and performed in Poland as an artist, dancer, singer, and humorist, mostly in the Yiddish language. With his stage partner and future wife, the dancer Yadwiga Podstolska, he fled the advance of Nazi forces and took refuge in the Soviet Union where foreign artists were rare and appreciated. The couple performed under the names of Johnny Stone and Lydia Waren in an acrobatic dance duo. Toward the end of the war, the two artists joined the civilians who followed the Polish Army of General Anders, which had been raised in the Soviet
Union, from Iran all the way to Palestine. They lived there for about five years during the 1940s. In 1947, the couple got married in Haifa. In February 1948, they came to France. Round about 1950, Dave Cash and Yadwiga regularly left on tours to North and South America, notably to Argentina where they obtained passports (still being stateless at the time). Toward 1960, with the help of friends the couple moved into their locale, Bagatelle at 29 boulevard de Clichy where they created a first Jewish cabaret. Several years later, David Cash created his own cabaret that bared his name not far from there10. In 1966, Dave and his wife obtained French nationality. David Cash died in May 1981 in Cannes. Yadwiga passed away in 2001.

Browse our archives on Dave Cash