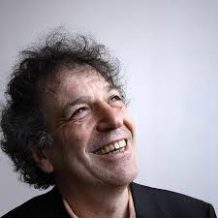 A pianist of klezmer music, a composer and a storyteller

With a solid background in classical music, Denis Cuniot is at the same time a music teacher, a director of a music conservatory, and a pianist of jazz and improvised music.

From 1983 on, with his encounter with Nano Peylet (clarinet player in the band Bratsch), he became one of the main initiators of the revival and recognition of klezmer music in France.

Yiddish was the mother tongue of his mother, Bluma Mélélat, born in Warsaw in 1929. But she did not pass the language on to her son, as she wished for him to be integrated and assimilated. She needed to leave her pains far away, particularly the fact of having been a hidden child, and the killing of almost all her family. We can then ask ourselves if it’s not the absence of transmission that pushed Denis Cuniot towards the path of klezmer music (“Kli-Zemer”, literally instrument of the voice, of the singing), in order to compensate for this absence. A music for people to hear Yiddish, without pronouncing it…

In 1984, he created with Nano a musical show Notes de voyages, Voyages de notes based on a story of Chelm : When Shlemiel goes to Warsaw, known also under the name Gueitzel le curieux. With this story, he discovered the genius of Yiddish literature, and met several Yiddish teachers in order to get the translation.

After leaving this band in 1998, he created Les rendez-vous au métro Saint Paul, based on the short stories by Cyrille Fleischman, a solo performance where he was a storyteller and a piano player.

In 2000, with the young virtuoso clarinet player Yomguih (or Yom) he created a duo and recorded the disc The Golem on the Moon.

One can notice also that in 2005, he took part in the creation of the Klezmer Brass Band of Ile de France Region gathering more than 40 musicians, amateurs and pros. The repertoire was conposed of klezmer music and Yiddish songs.

In 2007, his disc Confidentiel Klezmer received a great success from the public and the press.

With Bruno Girard in 2008, he created the duo YAT, Yiddish Atmospheric Touch, which was dedicated to Yiddish songs. Their first CD Mir Geyen in which we can hear the song Brooklyn by the sea by Mort Shuman, translated in Yiddish, was released in 2011.

In 2012 he released his second solo disc, Perpetuel Klezmer.

In 2013, he created a duo with David Konopnicki on electric guitars, and paid tribute to todays composers of klezmer music, in particular in France and the United States.

In 2014, to celebrate his 30 years of involvement with Yiddish culture and klezmer music, he performed a 6 hour long concert: the Râga Klezmer featuring a repertoire that spanned two centuries of klezmer music.

In 2016, he received the Max Cukierman Prize for his contribution in Yiddish culture

In 2017, for the 3rd gala concert of the European Institute of Jewish Music, he created the show Klezmer Trans’Africaine which brings African and klezmer music together, based on dance, spirituality and transe.

Browse our archives on Denis Cuniot