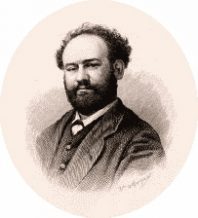 Born in Paris on November 12th 1836, Samuel David was admitted at a very young age into the music conservatory, where at the age of 13 he won a first prize award in solfeggio (1850) and then in harmony and accompaniment (1854). A student of Halévy (counterpoint, fugue, composition), he won a first prize of fugue in 1855, before winning the first prize of Rome three years later. A resident in the Villa Médicis in Rome in 1859 and 1860, he went back to Paris the following year.

Meanwhile, he became choir director in 1856 at the Théâtre-Lyrique, and got to perform at the Théâtre des Folies-Nouvelles his operetta in one act, entitled La peau de l’ours. Samuel David never stopped composing during his whole life. He is the author of four symphonies and many vocal works, but it is most of all stage music that attracted him. He created many operettas, operas or comic-operas, of which most of them remained in manuscript, and were never performed. It was only the comic-opera Mademoiselle Sylvia that was performed, on April 17, 1868. Despite the approval of the audience, it was never performed again !

As a teacher, Samuel David wrote a book called L’art de jouer en mesure (The art of playing in measure) (1862).

But it is when he was appointed “director of the music of the consistorial temple” in 1872, that Samuel David showed his best. This position, newly created by the consistory during the construction of the great synagogue of rue de la Victoire, was established to unify the liturgical repertoires.

Léon Algazi wrote in 1953 that “Samuel David dedicated himself to his task with a remarkable enthusiasm and as for an important religious mission.” He worked to recover the traditional songs by finding their primitive form. The Kol Nidre, sang every year during Yom Kippur, illustrates this statement perfectly.

David also harmonized many musical pieces with modal rather than tonal harmonies, while keeping, when necessary, the original chants “which do not support any kind of harmony or that accommodate it badly with our bars of measure”. In many works, he takes as a starting point famous melodies by Beethoven, Rossini, or Mendelssohn.