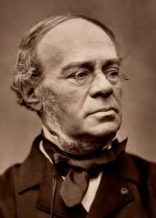 Elie Lévy (1760-1826), father of Fromental Halévy, native of Furth, a small town situated north of Nuremberg, was singing at the synagogue. After the declaration of Human Rights, he settled down in France. In 1798, he married Julie Mayer, a Jewish woman from the Lorraine region, and had his first son : Jacques François Fromental Elias Lévy was born in Paris on May 27, 1799. After the decree of 1808 ordering the Jews to be registered by the state, Elie Lévy changed his name into Halévy, in reference certainly to the 12th century Sefardi philosopher and musician, Juda Halévy.

Raised with the synagogue’s chants, young Fromental revealed himself particularly talented in music. At the age of 10, he entered the Music School of Paris and entered the class of Cherubini two years later. At the age of 20 he received the Grand Prize of Rome. In Vienna, he spent time with Beethoven, but he was more admiring of Mozart. After his difficult beginnings with the lyrical art, he suddenly became famous in 1835 with his opera La Juive, based on a libretto by Scribe. This success was phenomenal in Europe for almost an entire century. It was translated into many languages and performed many times. It was then forgotten until middle of the 20th century.

In 1840, Fromental Halévy was appointed teacher of composition in the Music School of Paris; his students being Gounod, Bizet, Saint-Saëns… Tempted for a time by politics, he ran for the National Assembly, without success. A member of the Beaux-Arts Academy since 1836, he was appointed perpetual secretary in 1854. Despite this total integration in French politics and culture, Halévy continued to collaborate with the Jewish community, but kept his distance from the too strict orthodoxy.

He wrote various vocal music pieces for the synagogue, such as Vayehi binsoa – a solemn piece accompanying the removal of the Torah from the tabernacle -, the psalm 100 Mizmor lessodo, the psalm 115 sung during the ceremonies of Pessah, Chavouot and Soukkot, and the psalm 118 Min hametsar that closes the Hallel. This last work for 7 voices was performed for the marriage of his nephew, Edgar Rodrigues to Louise Meyer on May 2, 1858. This psalm was also sung for the inauguration of the Temple de la Victoire, September 9, 1874.
Halévy was also the composer of a musical version of psalm 130 Mimaamakim, well recognized in its Latin version entitled De profundis (Out of the depths I cry to you, Oh Lord). This imposing musical work (chorus and orchestra) was ordered to be written by the three official religions of France by Louis XVIII’s minister of religion to commemorate the death of the Duke of Berry (1778-1820), a nephew of the king and heir to the throne, assassinated during the night of February 13 to 14, 1820.