Cigarillos en el Shtruddle is a french band composed of the pianist and founder of the group David El Shatran and of his 12 musicians.
They have as today released two CD’s. The first one When Klezmer Meets Salsa was released in December 2013 and the second one Somos los Cigarillos, in December 2016, published by the Editions of the EIJM.
Their style, a mix of latin and klezmer music, reminds of what was done in the USA in the 1950’s and 1960’s.

Hélène Engel makes us hear a selection of their songs, such as Misirlou, Ale Brider, Somos los Cigarillos or Etmol. 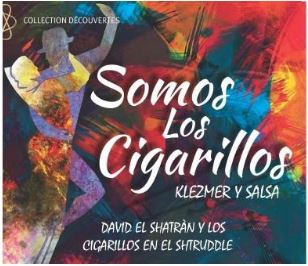