Composer, folklorist and musicologist, Joel Engel was born in Berdyansk (Crimea) in 1868. After studying law and on the advice of Tchaikovsky, he enrolled at the Moscow Conservatory, where he studied with Sergei Taneyev.  After obtaining his diploma, he was offered by the liberal Moscow newspaper Russkie Vedomotsi, a position as musical critic and editor, post he was to hold until 1918.

Inspired by the nascent Jewish nationalist movement and by ethnography, as early as 1898 Engel began to collect Yiddish folkloric songs. In 1900 and 1901, in the company of Saul Ginzburg and Pesakh Marek, two historians specialized in the study of folklore, he organized conferences and concerts in Moscow and Saint Petersburg. He was considered at the time the principal expert of Jewish music in the Russian Empire, a position which―associated with his passionate temperament―sometimes led him to engage in polemics, in particular with Sholem Aleichem and the author of popular Yiddish songs, Mark Warshawsky with respect to the authenticity of the compositions published by the latter.

En 1905, Engel helped democratize music by co-founding a music school in Moscow that was open to all.  He also played a role of the first importance in the creation of the Society for Jewish Folk Music (Gezelshaft far Yidisher Folks-Muzik) in Saint Petersburg in 1908.  He had his works, inspired from Jewish folklore, performed and published there 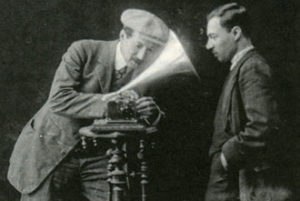 and created a Moscow section of the Society in 1913.  Between 1912 and 1914, he participated actively in the ethnographic expedition led by Shalom An-Ski in the Pale, the zone of Settlement in Russia where most Jews lived.  There, he collected and recorded hundreds of Jewish songs on wax cylinders using the invented Thomas Edison phonograph.

Deeply involved in the creation of a Jewish national music, Engel edited several collections of folklore songs and roughly 150 original pieces, compositions of his own and other Russian Jewish composers.  In addition to Jewish music, he took interest in Russian and European music and devoted conferences to them, as well as reference works published particularly in German.

In 1922, Engel left the Soviet Union for Berlin.  There he founded the musical publishing company Yuval, which reissued works published by the Society for Jewish Folk Music, as well as the new creations of Russian Jewish composers.  In 1924, he emigrated to Tel Aviv and taught there at the Shulamit Music School.  In addition, he composed for the Ohel Theatre, directed several choirs and gave conferences.  During the last years of his life, he composed works inspired by the Zionist musical culture of the Jewish communities in Palestine.

After his death in 1927, his wife donated his manuscripts to the Archives of Kiev and of Moscow.  A homage is also paid to him by the city of Tel Aviv, which awards every three years the Engel Prize to contemporary Israeli composers.

As a composer, Engel is especially known for his vocal arrangements of modern Hebraic poetry and Yiddish songs, as well as for his stage music in S. An-ski’s play, The Dybbuk, created in Moscow by the troupe of the Habima Theatre.

Browse our archives on Joel Engel