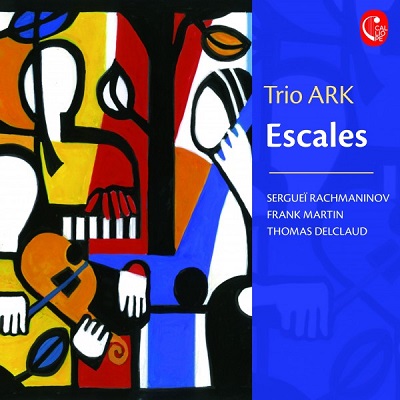 Three musicians, three countries, one city … Established in Paris, the Trio ARK is the image of this cosmopolitan city. Native of different countries, the musicians of this trio distinguish themselves by their approach to a vast classical repertoire, that they enrich with other artistic forms and styles like creation, improvisation, painting, theater.

Formed in 2011, the Trio ARK is composed of Antonina Zharava on cello, Renato Kamhi on violin and Thomas Delclaud on piano, graduated respectively from the superior conservatories of Paris, Brussels and Lyon.

With this first album, the musicians of the Trio ARK introduce various musicals visits to the four corners of Europe. They explore facets of each country visited with constantly revived assortment of their instruments. A journey from Antonina’s Belarus to Thomas’ adopted Switzerland and the Cevennes of his youth, passing through the Yugoslav Balkans, illustrated by the Sephardic songs that lulled the young Renato.