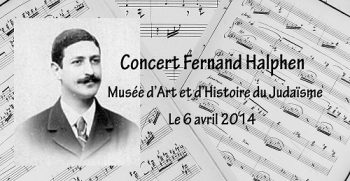 Concert for the centenary of World War 1

On April 6, 2014, for the commemorations celebrating 100 years after World War 1 (1914-1918), the European Institute of Jewish Music organized a concert, along with the Museum of Art and History of Judaism, around the works of Fernand Halphen, Gabriel Fauré, Reynaldo Hahn, Jules Massenet and Claude Debussy from which you can watch a few excerpts

The concert was presented by the musicologist Laure Schnapper, president of the EIJM. The musicians were Marie-Laure Garnier (soprano), Célia Oneto Bensaïd (piano) and Célia Triplet (violin).

Watch the conference by Laure Schnapper : Fernand Halphen – A Jewish musician in the Great War