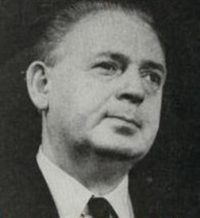 Leo Fuld was one of the last popular Yiddish singers. His career started long before world war II and ended when he died in 1997. Before the Second World War, Fuld was already a very famous artist in Europe and in America. With his immediately recognizable voice, he recorded several discs in various languages, especially in Yiddish, English, German, French, Hebrew and Dutch. His career after the war made him become once more a star throughout the world and on the most prestigious stages. At the age of 83, he recorded « The Legend », surely his best disc, nicknamed the « Sgt Pepper of Yiddish music » (Abe Goldstein).

Born in 1912 in Rotterdam, Leo Fuld was the third child out of ten of a poor Jewish family. His father, Louis Fuld was a vendor of occasional goods. Fuld’s gift for singing was revealed at an early age during the synagogue’s services. He received a grant to study at the “Seminar”. His parents hoped that young Leo would become « hazzan », cantor at the synagogue. At the age of 16, Fuld sang already in the synagogue. At the same time, he performd secular songs in bars, in particular in Rotterdam where he began by singing 60 songs for one dollar ! Later on, his success on stage pushed him to pass an audition on radio station VARA. He got immediately hired and started perfoming with Louis Davids. He went to England in 1932 to pass an audition for the BBC. He then became the first Dutch singer of the BBC.

At the age of 19, he got spotted by Jack Hylton, who made him sign a three year engagement with his famous orchestra, leading him to perform on all the stages of Great Brittany and continental Europe. In 1936, Clifford C. Fisher hired him in the French Casino of New-York, and then in the Paramount Theatre on Broadway.

As he became an internationally renowned artist, Fuld started adapting Yiddish and Hebrew songs and included them in his repertoire. In the French Casino, his greatest success was « Rozinhes mit Mandlen », and the great Al Jolson came back every night just to hear him sing. In 1938, his temporary visa expired and he was forced to go back to Europe to ask a new visa. He boarded on the last boat before the Nazis invaded the Netherlands, and immediately offered his services to the Free Dutch Government in Exile. With Hendrik Willem Van Loon, he started doing short-wave radio shows for Holland and Netherland East-Indies. Rumors started to circulate on the fate of the Jewish population of Holland, and actually, almost all Fuld’s family members were killed by the Nazis. The consequence for Fuld was that he didn’t have any more spirit to perform in front of an audience, and stopped singing.

As he had a great talent for writing, he quickly became one of the most sought-after writers on Broadway. He wrote for actors such as Milton Berle, the Ritz brothers, Jackie Miles, Jackie Gleason, Jan Murray, Jerry Lewis and Dean Martin, before creating the program called the Kraft Music Hall. He wrote, produced and directed on stage a musical comedy called « Fun For Your Money » with which he toured all over the country.

In 1948, he went back to Holland as an American citizen to get news about his family. Upon his arrival, to thank him for his radio shows during the war, thousands of people greeted him with acclaim, and he was offered a contract to sing in Amsterdam’s biggest theatre. As he had not sung for 5 years, he was scared to death, but the success was such that the show continued six weeks more than programmed. After getting his confidence back, he agreed on a new engagement at the London Casino where he made a triumph.

New proposals to sing came then from all over the world, and as he performed in Paris. There he visited a small Yiddish cabaret where he heard a survivor from the Warsaw ghetto singing a song that moved him deeply : « Wo Ahin Soll Ich Geh’n ». Fuld was so moved by this song that he asked its author for a copy, certifying it would become a world-wide hit. And it was. Back in England, he wrote the lyrics and recorded it for Decca under the title « Where Can I Go ? ». The song became a hit in America : Fuld sang it on television shows hosted by Milton Berle, Perry Como and Frank Sinatra. The song was also recorded by great singers such as Ray Charles and Steve Lawrence and Fuld had among his fans such celebrities like Billy Holliday, Al Jolson and Edith Piaf.

From 1949, Leo Fuld performed on all stages of the world, at least five times. He shared the stage of the Théâtre de l’ABC in Paris for ten years with Edith Piaf and was even hired by the Emperor Hailé Selassié for the wedding of his daughter in the Imperial Palace of Addis-Abeba.

In 1956, he opened his own night-club in New-York, before moving it to Las Vegas. On his 80th anniversary, he went back to the Netherlands. With the producer Mohamed El-Fers and the arranger Kees Post, he recorded, at the age of 84, his mythic album in Yiddish « the Legend ». In this album, Fuld performs his most well-known songs, but with a new Oriental arrangement.

At the age of 84, Leo Fuld married for the third time. He passed away one year later in his home in Amsterdam.

Browse the archives on Leo Fuld