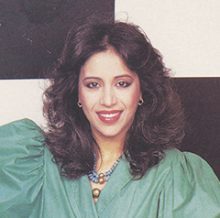 Ofra Haza עפרה חזה, (Bat-Sheva Ofra Haza), born on November 19, 1957 in Tel-Aviv and deceased on February 23, 2000 in Ramat Gan, was an Israeli actress and singer native of Yemen.

At the age of 12, Ofra Haza started acting in a local theater troupe. Her talent as a singer was noticed by Bezalel Aloni who ran many productions with her and who became her mentor.

At the end of her military service in 1979, she started a solo carreer on stage and became at the age of 19 the first pop star of Israel.

Chosen to represent her country during the 1983 Eurovision contest with the song “Chai”, she won second place and started to become known outside of Israel.

Her album “Yemenite songs” and the song “Im nin’alu” marked a turning point in her career, bringing in pop elements that would attract a larger public. She then released several albums intended for export, and collaborated with American or English artists, such as Iggy Pop or Eric B. & Rakim. 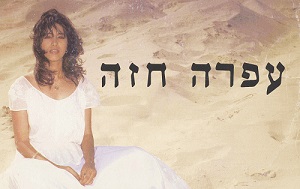 She recorded one or two discs throughout her career each year and contributed to the music of the cartoon “The Prince of Egypt”, as well as on other films.

Look at her discography
Browse our archives on Ofra Haza