Radio program hosted by Hélène Engel, broadcasted on Radio SHALOM Montréal in 2012, in which she presents the CD Adio España by the band Baltimore Consort, released in 2009.
This album features songs and popular dances related to the three monotheist religions settled in the Iberian Peninsula during the Reconquista period.
We will hear a vast range of instruments of that time, doubled with the voice of the brazilian singer José Lemos. 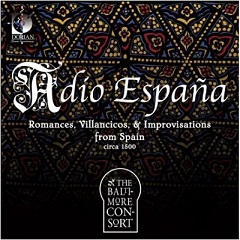