Idan Raichel is a keyboard player, composer, performer and arranger from Israel, settled in Kfar Saba near Tel Aviv.
His first album released in 2002, “idan Raichel’s project” is a great success, inwhich he mixes electronic music, Israeli folk music and traditional African music.
Several African and Israeli artists participated in his project, such as Shoshana Damari on his album Mimaamakim (2005).
Hélène Engel presents to us the album “Bein Kirot Beiti” released in November 2008. 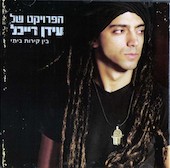