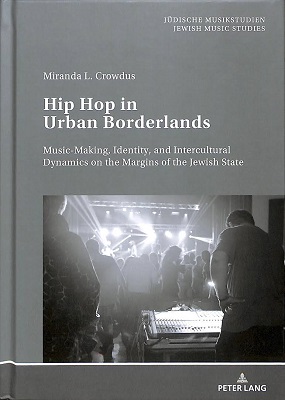 “Music-Making, Identity, and Intercultural Dynamics on the Margins of the Jewish State”. Such is the sub-title of this new book, first of a series of studies on Jewish music. What part does Hip Hop play in the definition of identity in Israel today?

Hip Hop emerged in Israel in the early 1990s and is performed by many individuals and groups often divided by conflicting aesthetics, ideologies, political and social positions, and national identities. Using an ethnographic, interdisciplinary approach, the researcher Miranda Crowdus highlights the relationships between Jewish and non-Jewish identities operating in South Tel Aviv, in terms of grassroot and commercial Hip Hop initiatives.

While this book focuses on one urban area, it addresses broader themes relating to popular music and globalization, including the disjunction between the day-to-day experiences of practitioners and the ideological projections used to define them.

Miranda L. Crowdus is a Research Associate at the Europäische Zentrum für Jüdische Musik (EZJM) European Centre for Jewish Music in Hanover, Germany. The common thread driving her work in musicology and ethnomusicology is an engagement with Jewish identity and culture, inter-religious dialogue, and artistic expression.