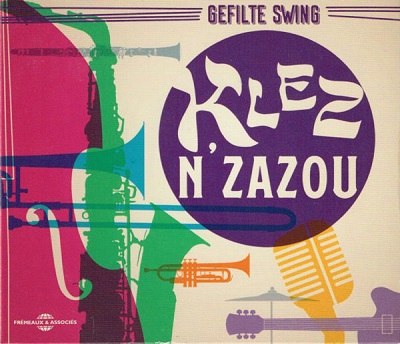 There’s zazou in this CD! The zazous were a subculture in France during World War II. They were young people expressing their individuality by wearing big or garish clothing and dancing wildly to swing jazz and bebop. The zazou’s swing of this CD answers to the klezmer music, festive and moving, one of the essential facets of Gefilte Swing. And if there were only zazou’s swing..? Prohibition jazz? There is. New Orleans jazz? There is. French songs with a touch of Yiddish? There is. And even rock and reggae, there is! So one can say this album is completely meshuge! (crazy in Yiddish).
But the good thing with klezmer music is that it goes well with every style. Marked with the spirit of openness, Gefilte Swing invites no less than ten guests on this new album: singers, musicians, coming from the world of Yiddish, of jazz, rock, for an amazingly successful fusion. Without forgetting the spark of madness. Wa da la di dou da di dou la wa wa !”

Like for keeping a foot in the 20th century, and its jazz and klezmer music, Gefilte Swing was created in December 1999. It gathered then a singer and four musicians: clarinet-saxophone, trombone, guitar and double bass. Then the band expanded and many other musicans brought their energy. The sound also changed, passing from Gypsy music to a spirit closer to the klezmer orchestras and small 1930’s swing bands.