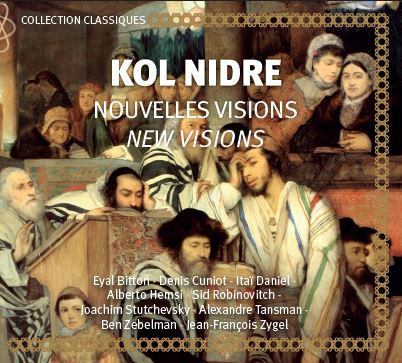 “Kol Nidre” with these words starts the impressive and moving prayer introducing the 24 hours of the most solemn day of the Jewish year, Yom Kippur. The traditional melody of this prayer always inspired fascination and enchantment, not only in the Jewish world, but also for many composers who took from it a source of inspiration to write beautiful pieces.

In 2010, the Union Libérale Israélite de France (ULIF) and the European Institute of Jewish Music (EIMJ) released a 1st disc called “Kol nidre – Eight visions“. Eight years later, the ULIF Copernic and the EIJM released this 2nd CD which offers ten new musical visions of the Kol Nidre, including two world premieres : the Kol Nidrei by Alexandre Tansman (manuscript, 1945) and the one of Jean-François Zygel for piano.

This CD has been produced with the support of the Fondation du Judaïsme Français, and the Fondation pour la Mémoire de la Shoah, the Fondation Irène et Jacques Darmon, under the aegis of of the FJF, and the Alliance Israélite Universelle.