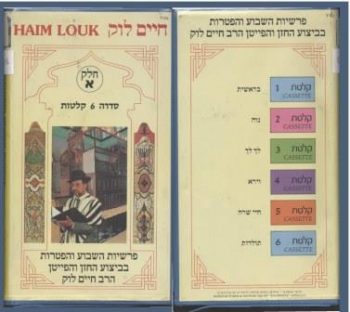 The 5 box sets by Haïm Louk comprise each 6 audio cassettes featuring the lecture of the weekly section of the bible. Every parasha is present, as well as the corresponding haftarot.

Haïm Louk in a few words :

Haïm Louk was born in Casablanca, in Morocco, in 1942. He became famous as he was already, at a very young age, a music prodigy. With a beautiful voice and great talent, he was the mentor of the master of Jewish Moroccan liturgy, Rabbi David Bouzaglo.

Since his studies in Yeshivot in England and Morocco, Haïm Louk became school director in Morocco and in Israel, where he lived from 1964 to 1987.

In 1987, Haïm Louk moved to Los Angeles to become the rabbi of the Sefardi community ” Em Habanim “. Following the tradition of former Sefardi erudites, Haïm Louk excelled in the rabbinical writings and in his work as an educator. Thanks to his music talents and his love for Sefardi poetry and liturgy, he made many recordings of Jewish Moroccan liturgy.

Internationally reknowned as a virtuoso of classical Andalusian music, he performed many successful concerts in Morocco, Israel, Spain, France, Belgium, Canada, Poland and the USA.

Watch a video of the reading of the parasha Pekoude :