Hélène Engel presents two CDs performed by singer Ruth Levin to compositions by her father Leibu Levin, a Romanian-born Jew, singer, composer and narrator of Yiddish literature. The 2013 CD Geheyme Gest, released by Ruth Levin, features a dramatic musical style found in Yiddish but also Russian and Austro-Hungarian song. The lyrics are inspired by 20th century Yiddish poetry. The second album is an anthology album in which Leibu Levin and his daughter Ruth sing together. 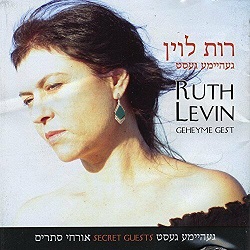 Hélène Engel is a classically trained singer, musicologist, author, composer, performer and arranger. She is passionate about all aspects of Jewish music, from field collecting to current compositions. Based in Montreal, she hosts the program “Les faces cachées de la musique juive” on Radio SHALOM Montreal, which will become in 2017 “La culture juive enchantée” on Radio CJRS Montreal.