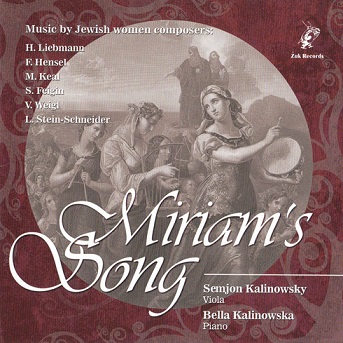 ” Then Miriam the prophet, Aaron’s sister, took a timbrel in her hand, and all the women followed her, with timbrels and dancing. Miriam sang to them: “Sing to the LORD,
for he is highly exalted. Both horse and driver he has hurled into the sea.”” (Exode 15:20-21)

This is an album that pays tribute to Jewish women composers. In the 19th century, being a Jewish woman was a double obstacle for musicians and composers, who had to live with an anti-Semitic environment, as well as a strict distribution of roles between men and woman in the Jewish society. Their tasks were mainly to take care of the house, children and husband. But some women overpassed these archaic views, and followed their passions.

Fanny Mendelssohn-Hensel, born in 1805, is one of them. Although very talented with music, she had to prepare, as her father warned her, to be model spouse, and to forget these “irrelevant hobbies” that would interfere in her hard and continuing tasks as a housekeeper. This made her furious. But her husband, Wilhelm Hensel, recognized her creative talent, and let her do as she wished. For her 29th birthday, he created a painting for her where Fanny was depicted as Myriam, holding a tambourine, symbolizing the acceptance of her art.

Other similar routes can be found, with Helene Liebmann, Vally Weigl, or Lena Stein-Schneider.

The Kalinowsky duet pays homage to these women, playing some of their compositions at the piano and alto.