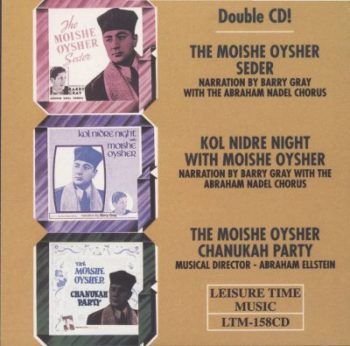 This 2 CD box set, issued in 1994 and reissued in 2010 includes 29 tracks from Moishe Oysher’s Passover seder, and from Kol Nidre (Yom Kippur) and Hanukka’s services.

Born in 1906 in Lipkon (Bessarabia), Moishe Oysher, was a descendant of 6 generations of chazanim (cantors). In 1921 he left for Canada to join his father who emigrated a few years earlier.

Gifted with a particuliar voice, he started a career as a cantor and actor of Yiddish theatre. He also played in three Yiddish movies and performed in his last movie « Singing in the Dark » in 1956, in which he performed a survivor from the holocaust, suffering of amnesia and who became a singer in USA.

Two years later, in 1958, he passed away in New Rochelle in New-York state.