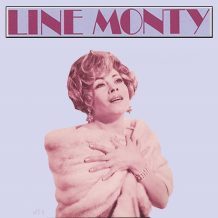 Line Monty whose real name was Éliane Serfati (also known as her stage name Leïla Fateh) was born in 1926 in Algiers into a music lovers family.

Around the age of 25, she started to learn to sing with an Italian teacher and performed in public, mainly in charity galas.
She went to Paris in the beginning of the 1950’s, and as soon as February 1952, recorded under the name Line Monty, with the music label Pathé Marconi, several 78 RPM discs in Arab.
The pianist Maurice El Médioni played with her throughout her Oriental career.
Her friend Youssef Hagège also known as José De Suza, a famous author and composer who accompanied the best of Oriental music artists, proposed one of his compositions to her : L’orientale. 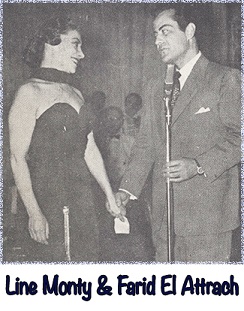 L’Orientale quickly became a hit and would be sung by Enrico Macias ten years later.
One year later, Line Monty changed her repertoire. She gave up, for a time, the songs in Arab, and started singing in French.
From the end of December 1952 till October 1956, she recorded several 78 RPM discs, still with the music label Pathé, accompanied by the orchestras of Raymond Legrand, Marius Coste or André Popp.

She received the Édith Piaf award, and the first prize of l’Olympia, frequent hits in the music-halls and cabarets of rich neighborhoods. She thus sang French songs all over the world, particularly in Canada, the United States (she had a trendy club in New-York for about ten years), in South America, Germany, the Netherland and the Middle-East.

Nevertheless, she again sang several Algerian songs after the independence of Algeria.

Line Monty played her own character in the movie Le Grand Pardon 2, by Alexandre Arcady.
She passed away in Paris in August 2003 and was buried in a cemetary in Pantin.
After Line Monty’s death, followed by Lili Boniche’s in 2008, a historical documentary on the treasures of Arab-Andalusian music called Le Port des amours, was released, directed by Jacqueline Gozland.

Browse our archives on Line Monty