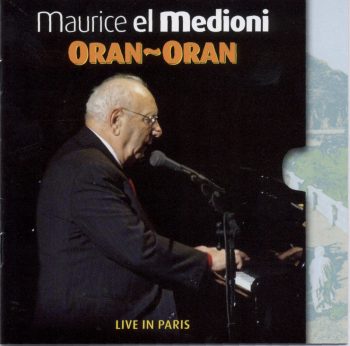 Since he was a child,  Maurice el Medioni lived with music. On the Rue de la Révolution, in Oran, in the family café, held by his uncle Saoud el Medioni, famous musician also known as Saoud l’Oranais, Maurice el Medioni got to meet the best musicians of the Arab-Andalusian tradition.

At the age of 9, he started learning piano,, an instrument that his older brother offered him. He played by the ear, and practiced with passion. After the allies arrived in Algeria, the American presence encouraged him to widen his audience and enrich his repertoire. The teenager performed in bars and clubs where soldiers went, and played American patriotic tunes, rumba, boogie-woogie and jazz.

Exuberant and generous, Maurice el Medioni included in his family many members, Jews and Arabs, famous or not, in his musical world : Lili Labassi, Line Monty, Blond-Blond, Reinette l’Oranaise…

In parallel, he continued his job he was trained for,: tailor. For 42 years, in Oran, then in Marseilles, where he arrived in 1962, Maurice el Medioni led these two activities.

These 2 CD’s are the restoration without editing of the concert performed by Maurice el Medioni in the Musée d’Art et d’Histoire du Judaïsme In Paris, in 2012. Over 2 hours of perfect, magical, live music, by an 85 year old aged genius !