A journey beyond time and tradition

CD on sale at the EIJM store

Judeo-Spanish songs have been with Lily Henley since childhood, but it is only in recent years that she has fully embraced this repertoire. Her approach owes much to her intimate knowledge of the fiddle and bluegrass, an ever-changing tradition. She revisits the Sephardic repertoire by composing new melodies to accompany texts from the tradition or by creating new titles. Oras Dezaoradas is also the result of her exchanges with Spanish-Jewish people who introduced her to the poetics of their language. On this album, she is accompanied by two exceptional musicians, the multi-instrumentalist Duncan Wickel and the double bass player Haggaï Cohen-Milo.

Originally from New York, Lily Henley trained in classical violin at the New England Conservatory before developing a passion for the bluegrass music of the American heartland and attending bluegrass festivals and summer camps. She then spent several years in Israel where she met bassist and jazzman Omer Avital. The way he drew on his classical training to revisit folklore encouraged her to incorporate elements of her American folk music experience into the Judeo-Spanish songs of her childhood. The music she composes and performs with her partner, multi-instrumentalist Duncan Wickel, could thus be described as a fusion of Sephardic songs with the ballads of the New World pioneers. 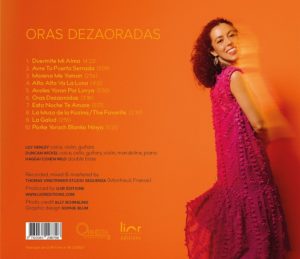