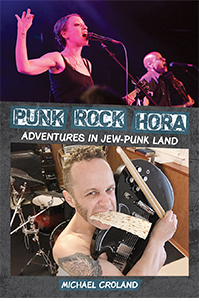 Since 2005, Michael Croland has schlepped far and wide covering Jewish punk bands. He has attended scores of concerts and interviewed dozens of musicians. Michael has drunk Manischewitz wine passed around a pit, witnessed a bagel fight between a singer and concertgoers, and scheduled his wedding around a band’s availability.

Punk Rock Hora spans 13 years of covering edgy Jewish culture, with comedic behind-the-scenes anecdotes, insightful analysis of the songs, and unparalleled access to the artists. Read a revealing account of how Michael fell in love with Jewish punk, interviews with thought-provoking Jewish outcasts, and browse playlists for Jewish holidays.
The first part of the book speaks of the Jew-punk phenomena and gathers a serie of articles on the matter written between 2005 and 2010. The second part gathers chosen interviews published in his first book Oy Oy Oy Gevalt !, as well as unpublished interviews. Finally, the third part, written between 2016 et 2018, presents the new bands, their albums and concert chronicles.

Michael Croland is the author of Oy Oy Oy Gevalt, a schorlarly book published in 2016. He has written many articles for his blogs and as a freelance writer for the Forward, JTA, Jewcy.com, and more.

Jewish punks are loudly and proudly Jewish in personally meaningful and outside-the-box ways. But Michael’s journey isn’t just about their art. By writing about Jewish punk, Michael created an identity for himself and learned how to be comfortable in his own skin.