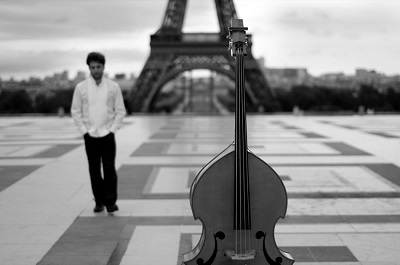 In 2014 Mr. Yulzari has released two albums: « L’Enigme Eternelle », four solo Jewish travels on the double bass, and « AZAFEA » with Nadav Lev. He also released two albums with Trio Klezele: “Freylekh From Vladivostok” (recorded live from their Russian tour along the Trans-Siberian Railway), and “Mosaique” (traditional and classical Jewish music). He recorded the soundtrack for the French film “L’Empreinte” (“Angel of Mine”) directed by Safy Nebbou with Quintette Monsolo, as well as two albums of chamber music works by G. Onslow and J. S. Bach on the Polynmie label. He is frequently invited on radio broadcasts, including Radio France’s “Le Cabaret Classique,” with host Jean-François Zygel, as well as on “La Cour des Grands,” Radio Judaica’s “Klezmer Attitude,” and on Sirius XM’s “Seth Speaks”.