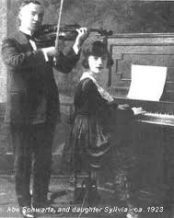 Abe (Abraham) Schwartz was one of the most famous and most recorded Jewish conductors in New York for decades. He was also a reknowned violonist for dance orchestras. His national and international fame is due to all the recordings he did with his various klezmer orchestras.

He emigrated to USA with his parents in 1899, at the age of 18, after spending his childhood in Romania, near Bucharest, where he acquired, it seems by himself, his musical knowledge. After having built his reputation as a dance orchestra conductor in the Jewish circles of New York, it is when he got hired to supervise the recording sessions of the music label Columbia that he entered the disc recording industry.

It was at about this same period (around 1917) that his career in the studio was launched with the publishing of two so-called Russian dance tunes : a sher and a bulgar, performed by his Eastern orchestra. None of these songs were Russian, but this exotic perception of the « mysterious Russia », that was trendy at the time, made everything sound oriental. The sheet music publishers and disc companies of that time presented the immigrant Jewish musicians as authentic vectors of « new » sounds. These composers and arrangers, supposedly « newly arriving from Russia » although most of them came from Ukraine, Belarus, Galicia, Poland, Romania or Bessarabia, were considered as transmitters of culture. In addition, many of these Jewish musicians played with Gypsy, Romanian or Russian musicians, and integrated parts of their styles. And even more, many of these melodies or styles were simply those performed by the klezmorim of various parts of Eastern Europe, without taking into account of the possible changes from their original traditions. Schwartz, after a first recording, becomes the band director for six other recordings in 1917, among which the famous Tants Tants Yiddelech, one of the first klezmer « hits », which was performed many times by many different artists in various styles, such as the famous French version « Tire l’Aiguille » by Renée Lebas.

Like many klezmorim before (and after) him, he wrote and performed for the Yiddish theatre, and in 1920, he edited and recorded over 35 klezmer melodies, in particular shers, bulgars, freilachs and khosidls. Some of them were composed by him, such as « A Glass of Wine », others were traditional tunes.

But among his best recordings, we also find him accompanied simply by his 12 year old daughter Sylvia on the piano.

He was then considered, but not officially, as a talent-spotter by the American disc industry, and as such, led many young artists to record, such as Naftule Brandwein and Dave Tarras.

Browse our archives on Abe Schwartz