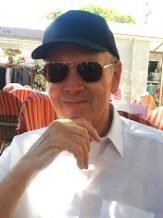 “Chérie je t’aime, Chérie je t’adore”, a simple and effective formula that made, makes and will make the crowd dance until exhaustion.

When in 1960, Alberto STAIFFI dealt with this song of Maghreb tradition, it became a hymn to the dance, the fun but also the nostalgia and forgetfulness of an Algeria left too soon, leaving with it the warmth of its white capital, its streets filled with various perfumes and bewitching music.

A real hit, “Mustafa, chérie je t’aime, chérie je t’adore” would be the culmination of a career started earlier in Parisian cabarets and more specifically “Le Soleil d’Algérie” along with famous artists such as Dario MORENO, Henri GENES and especially Sidney BECHET. 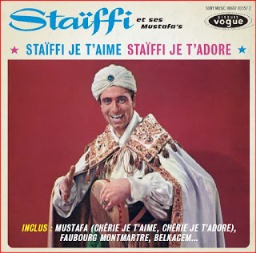 The famous American clarinettist (former partner of “Duke” ELLINGTON, Louis ARMSTRONG or Josephine BAKER), Sidney BECHET quickly became a friend, a confidant, a real older brother for STAIFFI. Vey quickly understanding the talent of STAIFFI, he introduced him to the music label Vogue with which he signed a contract. The starting point was to be the 45 rpm record “Les Oignons” a famous song of BECHET adapted into Arabic and that was broadcast many times on French radio Europe 1.

Since then, STAIFFI started a real career in the music label Vogue along with other promising artists of the label such as Johnny HALLYDAY, Colette RENARD, Jean CONSTANTIN, … writing hit after hit, “Faubourg Montmartre”, “Mon pays”, “Du tout ennuyé”… First consecration: the famous French concert hall OLYMPIA, where he performed with Colette RENARD and Jean CONSTANTIN. 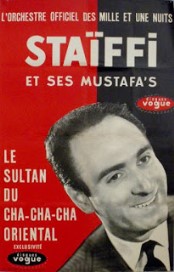 The happy, rhythmic but also nostalgic songs made him known on both sides of the Mediterranean sea, a mixture of West and East offering him a triumphal tour throughout the Maghreb and the Middle East.

But the political events that shook Algeria and France caught up with him. Concerning “MUSTAFA (chérie je t’aime, chérie je t’adore)” which became very popular at the time, rumours circulated that this song was the hymn of the F.L.N. (National Liberation front). From that moment, STAIFFI’s career turned into a nightmare; he who was not politically engaged was threatened. He was asked to stop singing “MUSTAFA”. The general governor in ALGIERS ordered a ban on the sale of the record “MUSTAFA” and all contracts and concerts of STAIFFI ET SES MUSTAFA’S were canceled. Traumatized, he decided to leave the artistic profession. 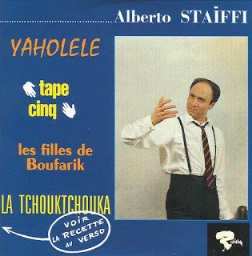 After 5 years of silence, in 1965, STAIFFI finally signed a contract with Barclay and recorded an EP of 4 tracks in close collaboration with his friend Gabriel CHEKROUN (author): : TAPE CINQ, YAHOLELE, LES FILLES DE BOUFARIK and LA TCHOUKTCHOUKA. This 45 RPM disc was a great success. But, scars often being difficult to heal, he gave up the profession completely and settled in the south of France, in Montpellier.

In 2001, Barclay/Universal informed STAIFFI that his song “TAPE CINQ” was included on a compilation produced by the music label E.M.I. “LA VÉRITÉ ÇA C’EST UNE COMPIL” along with Dalida, Khaled, Alabina, Rachid TAHA, etc… Later, the songs recorded with Barclay in 1965 were published on several compilations (FRANCE LOISIRS, MARIANNE MELODIE, READER’S DIGEST…). “LA TCHOUKTCHOUKA” was even used for the music of the film “SHEM” by Caroline ROBOH. 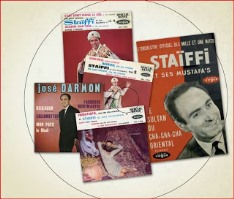 At the same time, STAIFFI was asked to host a show entitled “Success of yesterday, today’s success” on a local radio in MONTPELLIER: RADIO AVIVA. This contact with thousands of listeners put him back into the artistic world, which was not to displease him. 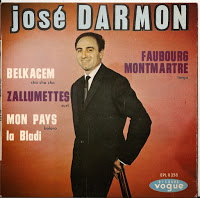