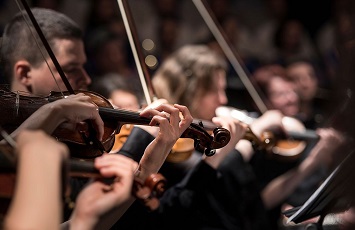 French music of the 19th and beginning of the 20th century was particularly honored under the baton of Daniel Couderd (Franck, Chausson, Chabrier, Milhaud, Debussy, Poulenc, Honegger, Satie). With Martin Barral, the orchestra made some “premieres”. In October 2000, the Orsay Symphony Orchestra created a Piotr Moss piece written for him, commissioned by the Ministry of Culture, “The Little Blue Monkey” on a text by Jean-Louis Bauer, and in 2011. the cello concerto by Philippe Chamouard. In 2012 was the release of the first world record of the oratorio “Ruth” by César Franck (1871) and in 2017 the symphony in C minor by Fernand Halphen (1897) which had not been performed since 1930
The orchestra regularly gives concerts with choirs, with the collaboration of the Orsay Campus Choir (founded by Daniel Couderd, who worked in exclusive collaboration with the orchestra for years), and choruses Darius Milhaud and Amadeus (Paris). ) who organize most of the Parisian concerts.