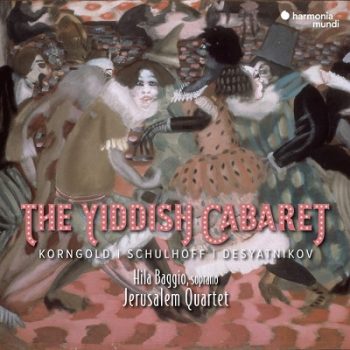 The disc’s program is the result of a work by the Jerusalem’s Quartet around the music of Yiddish cabarets in Poland between the two world wars. For nearly two years, the four musicians, assisted by the musicologist Gila Flam, began research in the archives of Jerusalem’s National Library. After a long task of selection, they retained five Yiddish songs that were sung in the Jewish cabarets of Warsaw and Łódź between 1919 and 1939. The first is a nostalgic song about Warsaw (Varshe), the second a parody of an American song which tells about the fate of a Jewish prostitute (In a hoyz vu men veynt un men lakht). The third (Ikh ganve in der nakht) and fifth songs (Ikh vel shoyn mer nit ganvenen) come from the repertoire of Yiddish « thieves songs » of the Jewish mob. The fourth song (Yosl und Sore-Dvoshe) is a duet between a man and a woman who live in poverty but dream of having a big family and living happily in a big town.
These five songs served as the “raw material” for a creation by Israeli composer Leonid Desyatnikov (1955) who made an adaptation for vocals (performed here in Yiddish by the Israeli soprano Hila Baggio) and string quartet. As it is described by Desyatnikov in the booklet of the disc written by Gila Flam : “This cycle is a series of free transcriptions for this music, commonly considered “low value”. It’s the eclectic culture of the proletarian and foreign, the culture of the cheap and posh, and, at the same time – in its best ways – an insolent and talented culture, full of self-irony and of imminent despair.” Gila Flam adds that “the Jewish musicians and performers played a leading role in Poland’s popular music, contributing to help enlarge the repertoire of Polish and Yiddish songs. With this, they influenced all the European cabaret’s music as well as Hollywood’s film music, and the music of theatres on Broadway in America.”

And it is precisely in Hollywood that the Jewish composer Erich Wolfgang Korngold (1897-1957) enjoyed most of his career. Born in Brno in Austria-Hungaria on the 29th of May 1897, a child prodigy, sometimes compared to Mozart, he is one of the last representatives of Viennese romantism. In 1925, he was the most frequently played composer after Richard Strauss in the German speaking countries. In 1934, he made his first trip to the USA, where he wrote essentially film music for Warner Bros. After a brief return to Vienna in 1937, he settled down definitively in 1938. Over a period of twelve years, he wrote eighteen film music, two of them (Anthony Adverse and Robin Hood) awarded with Oscars.
His string quartet n° 2 op. 26, in four movements, was composed in 1933 and debuted in Vienna by the Rose Quartet on March 16, 1934, just before the composer left for the USA. According to Jerusalem’s string quartet, this work by Korngold expresses his deep nostalgia for Central Europe’s musical traditions.

The last piece of music of this disc – slightly eclectic – is from the Czech composer Erwin Schulhoff (1894-1942). Born in Prague in 1894 in a Jewish family, Schulhoff was noticed very early on and encouraged by Dvořák. His style is characterized by a mix of atonality, surrealism and popular repertoire. Arrested by the Nazis on June 22nd 1941, he was interned in the Wülzburg’s fortress, in Bavaria, where he died of tuberculosis on the 28th of August 1942.
His Five pieces for string quartet (1923), dedicated to Darius Milhaud, were performed for the first time in Salzburg on the 8th of August 1924. They consist of a series of dances (waltz, tango, tarentella…) which take their inspiration from popular music of the time.

Learn more about the Jerusalem’s Quartet
Order the CD