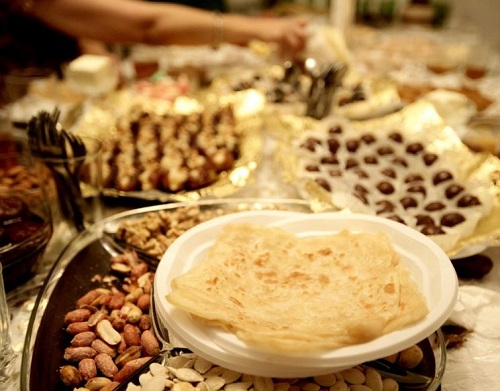 Listen to a musical selection for the celebration of the Mimuna

The Mimuna appeared in Morocco shortly after the arrival of the Jews expelled from Spain in 1492.
It has been thought of, and wanted like a call of the heart, like a song of hope, by this community, who suffered disgrace, repression and pyres of fire in Spain. Expelled on the night of the first Passover Seder, by the orders of King Ferdinand of Aragon and his wife Queen Isabella of Castile, the Jews arrived in Morocco in haste, just like their ancestors, hastily leaving Egypt and Pharaohs.

These early Sephardic Jews in the land of Islam instinctively joined together and gathered their few resources to spend together the Passover festival with dignity. At the end of the eighth and last day of Passover, still in a state of shock, they chose to meet again to appease their anguish around a festive meal. On the menu: Spanish culinary specialties based on wheat flour and bread accompanied by musical instruments and liturgical songs in Ladino from their native Spain.

Later in history, they will adopt the culinary specialties and the musical style of Morocco.

Thus was born that singular night of “Mimuna” deriving its etymology from the Hebrew word “Emuna” which means faith. This festive evening is intended to revive faith in hearts, to give hope in better days.

The playlist below offers a musical journey, to the rhythm of the melodies of the Mimuna. These tunes take us back to the warm atmosphere of this popular festival, now spread all over the world, and recognized in Israel as a national holiday during which communities of all origins gather in music around a good meal .
Happy celebration of Mimuna !