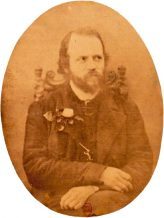 Charles-Valentin Alkan (November 3Oth 1813 – March 29th 1888), was a composer and precocious musician like Mozart, with a solid technique just like Liszt, and friend of Chopin (who “gave” him his students when he died). He has always been known as a great pianist of the Romantic period.

Alkan was born and died in the Jewish faith. With his brothers and sisters named Morhange, he chose the Hebrew surname of his father and became Charles-Valentin Alkan senior. He knew many ancient languages (Hebrew, Latin, Greek, Syriac) and translated the Old and the New Testament. He wrote to a German Jewish friend, Stephen Heller, that it was better to be Jewish to understand the New Testament… but destroyed his translation. He thought of writing music for the Bible, but never began.

He gave only a few concerts and established a solid reputation of being a misanthrope, especially after his failure in 1848, when he wanted to become a piano teacher at the music academy. Nevertheless, he was a famous teacher and earned his living by giving classes.

He collaborated a little bit with the Consistory for the transformation and unification of the liturgy, but composed only 2 liturgical pieces, requested by the hazzan Samuel Naumbourg (Ets Khayim and Hallelujah). He became the organ player of the synagogue in rue Notre-Dame de Nazareth (the first one of the great synagogues in Paris in the 19th century, before la Victoire, les Tournelles, Buffault, etc.), but resigned a few days later! He composed a compilation of Prayers for Organ, some with Hebrew texts aside, but these pieces are as much free compositions as prayers. He wrote a Paraphrase of Psalm 137 (Al N’harot Bavel), but gave to it the Latin name Super flumina Babylonis, and dedicated this work to an abbot. The lyrics of Psalm 41 are also in Latin.

He wrote short Jewish Melodies, but the first one (Adon Olom Acher Moloch, in Ashkenazi pronunciation), has the words Andon Ôlam, Anschér molac’h, and although Alkan didn’t write anything at random, we don’t know the cause or the origin of these changes. The third melody is without words, for organ, on a subject that the musicologist Anny Kessous-Dreyfus showed it was already used by Benedetto Marcello, a Venetian composer of the 18th century, and a Christian interested in Jewish liturgy. These melodies were dedicated to a Russian aristocrat, Zina de Mansouroff, from which we know nothing (a student, a mistress ?), but we know she became the female accompanist of the Tsarina, although this does not have much relation with Jewish melodies.

Alkan quoted the prophet Michée along with the 3rd movement (adagio) of his Great Sonata for piano and cello, without doubt his most finished work, one that is completely profane in appearance. This 3rd movement is composed in Ut major, has a meditative tone here that we find again in Ets Khayim.

Alkan died in 1888, crushed down by his library when he was looking for the Talmud, according to a legend, probably false, but appropriate for this great man. He was buried in the Jewish corner of Montmartre’s cemetery, on the Sunday of Easter…