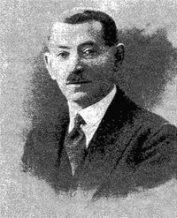 Samuel Alman was born in Sobolevka (Russia), in 1877. The sixth child of a family of 14 children, his father was a talmudist and musician, and his mother an amateur poet. At the age of 5 he sang in the synagogue’s choral and quickly became a soloist. He was nicknamed “the singing child of Sobolevka”. He learned to read music at the age of 10. When he was 17 years old, he entered the music conservatory of Odessa and began to write liturgical music. During the four years of his military service, he was a member of the musicians of the Russian army. He then attended the music conservatory of Kishinev. 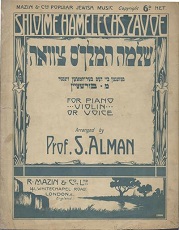 Witnessing the pogroms that teek place there in 1903, he decided to leave for London where his uncle is settled. In England, he continued his musical studies at the Guildhall School of Music and then at the Royal College of Music. He terminated his PhD studies when the First World War breaks out.

He rapidly became choirmaster in the Great Synagogue of London and then, for 22 years, the choirmaster of the synagogue of Hampstead quarter. He also conducted the London Hazzanim Choir and established the Halevi Choral Society, in which the repertoire is dedicated to compositions in Hebrew and in Yiddish. In 1911 and 1912, he conducted concerts of synagogue music at the Queen’s Hall and the Royal Albert Hall. 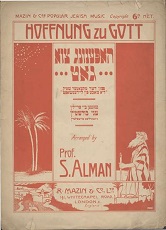 He also wrote liturgical music for the synagogues in which he sang. His compositions are often dedicated to great cantors of his time (Halter, Shechter and Boyars) and are for choir, cantor, piano and organ . In 1925 and 1938, he published a two-volume compilation of music works for cantor and choir, entitled « Shirei Beit ha-Knesset », for the Sabbath services.
The first volume, published in Berlin, gathers together 55 music pieces, with some of his own compositions. The second volume was published by the Oxford University Press, and contains 97 music pieces for the yamim noraim. 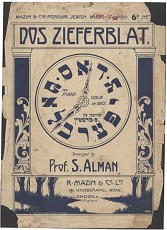 In 1929, a concert of his works was given at the Wigmore Hall, which achieved great success. It was the first concert of Jewish music performed in this concert hall.

In 1933, he was asked to update the « Blue Book, The Voice of Prayer and Praise – A Handbook of Synagogue Music », published in 1899. It is a complete edition of the « Shirei Kenesset Yisrael – A Handbook of Synagogue Music for Congregational Singing », published ten years before.
Samuel Alman added 58 music pieces, among them 15 of his own compositions. It was planned that each member of the congregation, every worshipper would have a copy of the songbook to follow the service. 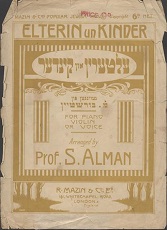 Browse our collections on Samuel Alman