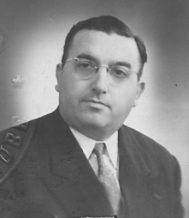 The Bécache dynasty : from Rabbi to musician

Jean Bécache’s grand-father, Shalom Bécache, was born in Bombay in 1848. He was a native of Bagdad and spoke Arabic from Iraq. During a pilgrimage to Safed, he fell in love with a young Algerian woman and followed her to Algeria, where he became rabbi of the Ben Thoa synagogue, the smallest synagogue in Algiers, in which was sung melodies from Algiers and Iraq. Shalom Bécache also founded a Hebraic printing company (he published French books translated into Hebrew, such as those by Jules Verne), and contributed to Hebrew periodicals. Concerning the culinary aspect, he imported to Algeria Iraqi cooking recipes, and especially the personal way of the Bécache family to make the harosset (1), with dates and honey.

Ben Sion Bécache, the eldest son of Shalom Bécache, was a teacher of Eastern languages, and spoke Arabic, Hebrew, 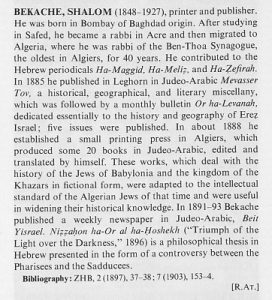 Aramaic and Syriac. During the war in 1914, he was a marine officer, participated in the Dardanelles landing and went to Salonica.
Ben Sion Bécache had 5 children: Jean (Charles), doctor and musician, born on June 28th 1911, received several awards from Algiers’ music conservatory for double bass, cello, composition and harmony; Elysée, his brother, also doctor, received a first prize in violin; another brother, Ary, played violin and was psychiatrist; Mathieu played oboe, English horn and was a judge; finally Mireille played the piano and was pharmacist.

In 1935-36, Jean Bécache left Algeria and settled in France. His son, Pierre Ben Sion Bécache, was born on June 14th 1938 in Livry Gargan.
On the eve of the war in 1939, Jean Bécache was mobilized as a doctor of the mobile guard in Drancy. Conscious of the danger, he sent his wife and son to Algiers, where Pierre grows up from 1939 to 1945. In 1940, Jean, who did not declare himself as Jewish by the authorities, continued his work as doctor for the mobile guard, despite the German occupation and the first Antisemitic laws (2).
Later on, he was called to his colonel’s office. An SS officer was also there. The colonel asked him if he is Jewish. Jean Bécache answered no. As soon as he got out, he fleed by bicycle to Moulins, crosses the demarcation line, takes a train to Marseille, and a boat to Algiers. He then goes to the Algiers police station and claims he is an escaped prisoner. Despite this, he is arrested a few days later and sent to Barberousse prison, because of the false accusation by the French police that he practiced abortion, which was strictly forbidden at the time. During his 3 to 4 months stay in prison (he will finally be released as his record is empty), he meets Jews and communists, and joins their resistance movement. During the night of November 7th to 8th 1942, Jean neutralizes the main post office, in order to facilitate the landing of the allies who reconquer Algiers. 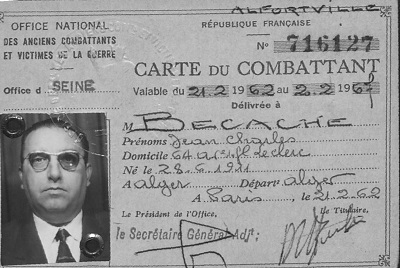 He then fought in Tunisia, participated in the landing of Sicily, the Italian campaign (with the battle of Monte Cassino), the landing in Provence, and the French campaign.

Jean Bécache spent 3 years at the front as an ambulance chief. His family returned to France after November 8, 1945.

In Algeria, Jean Bécache studied music. Winner of several music conservatory awards, he also played in cafés, and transcribed many liturgical melodies from Algiers, as well as piyyoutim (religious poetry). During the war, he continued to write music, in particular during permissions, and composed melodies based on Arab-Andalusian music. As an ambulance chief, he asked the two nurses and the driver, who were all Arabs, to sing the Arab-Andalusian melodies they knew, and he transcribed everything on sheet music.
After the war, Jean Bécache published several music scores, compositions, orchestral Arab-Andalusian suites and liturgical transcriptions. He was finally member of the orchestra of the 13th arrondissement of Paris, and conductor of the municipal orchestra of Aulnay-sous-Bois.
Jean Bécache died on December 19th 1985 in Alfortville. He is buried in the Israeli sections of Pantin’s cemetary.

Read a biography of Jean Bécache by his son Pierre Bécache