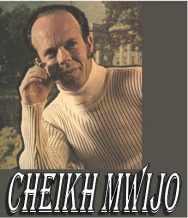 Cheikh Mwijo, whose proper name was Moshe Attias, was born in Meknes (Morocco) in 1937 and died in Kiryar Atta (Israel) on April 30, 2020. He was one of the greatest musicians of Jewish Moroccan folk in Israel.

He came, as do many Moroccan Jewish performing artists and composers, from a family of musicians going back at least to his grandfather. His father Yaakov Attias, a percussionist, performed in the ensemble of Mâalem (Master) Ben Haroush, together with Mordecai Elmaghribi, the father of Sliman Elmaghribi. Ben Haroush settled in Israel, where Mwijo supported him during his final days. As a token of gratitude, Ben Haroush left him his songbooks, which had also been handed down to him.
The songbooks would prove to be the source from which Mwijo drew his rich repertoire. Following the long-standing tradition of Moroccan Jewish musicians keeping their cards close to their chests, he refused to share them with interested academics or anyone else, for that matter. But on behalf of Prof. Yossef Chetrit from University of Haifa, Mwijo recorded many songs from these manuscripts, that Chetrit transcribed for his research on Judeo-Arabic poetry from Morocco. Following an encounter in 2011 with Mwijo, Christopher Silver declared that Mwijo was the only musician to master these songs since Ben Haroush. Mwijo claimed to know 1000 Mâalem songs, which made him earn the honorific title of “Cheikh” (Master). 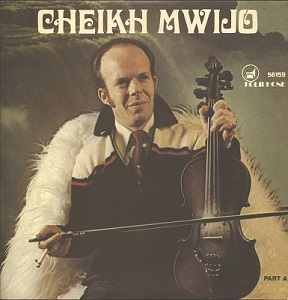 Mwijo moved to Israel in 1962 at the age 35. Sitting in a café in Haifa one day, Mwijo began to sing and this, he recalled, literally brought the unsuspecting patrons to tears. This event, combined with the lack of employment, mastery of songs inherited from family tradition and his unique voice, launched Cheikh Mwijo’s full-time career in the music industry.

Mwijo began his music career in Israel singing and playing the mandolin, an instrument associated mostly with Algerian music, but he would eventually switch to the kemanja, a violin played upright in the North African style.

Between 1962 and 1970, Mwijo estimated that he wrote and sold about 40 songs to Sliman Elmaghribi, the young musician whom he knew from Meknes. By 1969, Mwijo had started his own recording career, with the music label Koliphone / Zakiphon.
Throughout his career, Mwijo has been a discreet artist within the Israeli music scene. Unlike most of his contemporary Moroccan Jewish artists, Mwijo remained systematically connected to his community, performing almost exclusively at family and congregational events. Despite having recorded over one hundred albums, live performances remained his primary source of income. In addition, unlike his contemporaries such as Jo Amar or Samy Elmaghribi, who enjoyed both international recognition, Mwijo remained deeply anchored in the Moroccan-Israeli scene

Mwijo was a unique multifaceted artist. His repertoire was varied in terms of textual genres and musical styles. But he remained faithful to North African Arabic, with a Meknesi accent. This remarkable feature demonstrates his resistance to the Hebrew-centered ethos of the Zionist movement and the Israeli culture that emerged from it. Even when he recorded in Hebrew, the language was profusely peppered with Arabic vocabulary and grammatical formations. This style in fact marked the limits of his potential audience. But today, many Israeli with Moroccan origin consider Mwijo as an emblematic artist of Moroccan music for his use of their vernacular language.
Mwijo’s repertoire also reveals some of the ambivalent aspects of modern Moroccan Jewish identity. Religious zeal intertwines with modern secular practices, while rooted musical and textual genres interlace with contemporary urban styles.
Saint veneration was and still is a hallmark of Moroccan religious devotion ; hillulot (yearly celebrations of the death anniversary of saintly rabbis) remained a main stage for Mwijo’s performances in and outside Israel.
Cheikh Mwijo rarely recorded piyyutim nor was he a renowned singer of bakkashot in the Moroccan Andalusian style. On the other hand, he composed and performed numerous piyyutim in Hebrew and Arabic in honor of important Moroccan tzadiqqim (wise men). Among the great rabbis whom he honored, Cheikh Mwijo especially focused on members of the Abuhatzira family, the most prominent dynasty of Moroccan tzadiqqim, starting with its founder, R. Yaacov Abuhatzira. 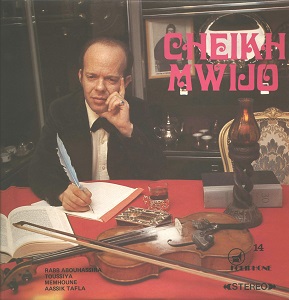 In the 1970s, Mwijo often performed abroad and frequently in France. One time, while in France, a Moroccan invited him to perform in Germany. Mwijo adamantly refused to play in Germany because of the Holocaust – even after an offer of 10,000 Deutschmarks (an extraordinary amount for that time) from his host. After this encounter, Mwijo headed to a casino, pulled the handle on a slot machine and won the equivalent of 10,000 Deutschmarks !
The predominant style of Mwijo’s songs was the Algerian chaâbi. He preferred the Algerian rather than the Moroccan styles, because they are “more delicate and sweet,” although malhun songs in Moroccan style were an integral part of his repertoire. Yet, Mwijo’s repertoire diversified in the course of time, and he recorded Hebrew songs in an attempt to reach larger audiences.Following Itzhaq Rabin’s assassination, Mwijo composed and recorded a moving song in his honor, set to a sad Turkish tune. Finally, he collaborated with many artists, such as the pianist Maurice El Medioni, or his lifetime partner on the stage, the ud player Nino Bitton.

Browse our collections on Cheikh Mwijo