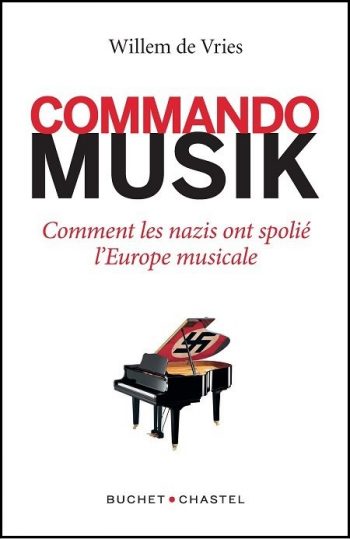 Born in Amsterdam in 1939, Willem de Vries is a PhD in musicology. During the writing of his thesis on « Darius Milhaud and jazz », between 1984 and 1991, he discovered the existence of a « music » commando, to which he then did research.

The theft of Jewish property by the nazis, consisted of real estate, companies, artwork, books… The cultural dimension of the pillage was organized by the Rosenberg (ERR) organisation, created in 1940 to eliminate all Jewish cultural life in all Europe.

The little-known dimension of this thievery concerning music : indeed, a special commando, the Sonderstab Musik ( “music” commando), led by distinguished German musicologists was created to locate instruments, sheet music, manuscripts and to take them from their owners.

Such is the subject of this book by Willem de Vries, which took over 10 years of research. It reveals for the first time the organisation of this commando that gave “transit” between 1940 and 1944, into Germany to hundreds of thousands of books, sheet music and musical instruments.

The composer Darius Milhaud, the pianists Wanda Landowska and Arthur Rubinstein, the music critique Arno Poldès, the cellist Gregor Piatigorsky were among the first victims of these massive thefts, about which the actors, the operation of the organizations and the extent are now put to light.

The French translation of this book received the support of the Fondation pour la Mémoire de la Shoah.

On the 31st January 2020, at Sciences-Po school in Paris (75007), is organised a day of studyon “Spoliated music”, or How the nazis looted musical Europe