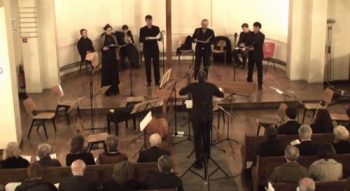 View three musical works by Salomone Rossi (ca 1570-ca 1630) and Cristiano Giuseppe Lidarti (1730-after 1793) performed by the Texto Ensemble directed by David Klein, on April 14, 2010, at the German Evangelical Church in Paris.

This concert, supported by the Fondation Rothschild – Institut Alain de Rothschild, the Fondation du Judaïsme Français and the European Institute of Jewish Music, was organized by Yuval, a French association for the preservation of Jewish musical traditions, in memory of its recently deceased founder Israel Adler (1925-2009).