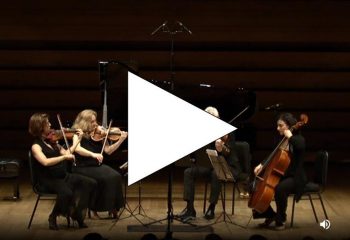 This concert of the ARC Ensemble, which took place in Toronto (Canada) in April 2018 in the Royal Conservatory’s Koerner Hall, spotlights the composer Walter Kaufmann (1907-1984), performing his Quartet n° 11.

The prestigious Ensemble ARC (Artists of The Royal Conservatory) performed all over the world, especially in Tel Aviv, Varsovie, Toronto, New York and Londres. For the CDs serie «Music in Exile», the Ensemble ARC, under the artistic direction of Simon Wynberg, does research aiming to restitute the forgotten or ostracized music under the repressive regimes of the 20th century.