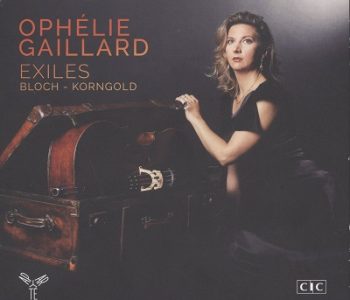 Ophélie Gaillard, cello, the philharmonic orchestra of Monte-Carlo under the direction of James Judd and the Sirba Octet

Erich Wolfgang Korngold is born in Brno (Austria-Hungary) on the 29th may 1897 and deceased in Hollywood on the 29th of November 1957. He was naturalized American in 1943.
Child prodigy, sometimes compared to Mozart, he is one of the latest representatives of Viennese romantism. In 1925, he is the most performed composer after Richard Strauss in German speaking countries. In 1936, he settles with his family in the USA, where he composes mainly music for movies for the firm Warner Bros. In twelve years, he wrote 18 music for films, two of them Anthony Adverse et Robin des Bois) having been rewarded by Oscars.
In 1947, at the age of 50, Korngold decides to give up the cinema and prepares his return to Vienna. But following a heart attack, it is only in 1949 that he crosses the Atlantic ocean with his sheet music and new ideas, such as the Symphony in F sharp, composed in Austria.
His attempts stay nevertheless failures : his years in exile, the changing of the society, the tastes of the audience, totally deleted him from the Viennese or German musical world. The establishment considers him as a film music composer, nothing more. In 1955, he comes back to Hollywood, where he disappears two years later stroke by a brain attack, aged only of 60.

In this CD, one can also hear the famous Overture on Jewish themes (op. 34) by Sergueï Prokofiev (1891-1953). Even if he was not Jewish, Prokofiev, who left Russia during the Sovietic revolution, was asked by old jewish friends from Saint-Petersburg to compose an art work inspired by popular Jewish music. This work, written in 1919, was orchestrated by himself in 1934.

In a totally different direction, Ophélie Gaillard and the Sirba Octet perform a series of Freilech, joyous dance from Eastern Europe, with binary rhythm, as well as a Yiddish lullaby by Chava Alberstein.

The spirit of celebration, tenderness, religious contemplation, are as many facets of the daily life and culture of several generations of Jewish migrants that are told by the humanistic bow of Ophélie Gaillard.