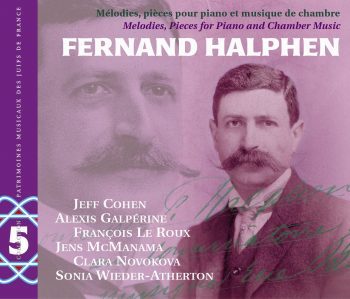 MUSICAL HERITAGE OF THE JEWS FROM FRANCE COLLECTION, VOL 5

With two CD’s (130 min of music) and a bilingual French / English well documented booklet, this album presents as a world premiere various works for voice, piano, violin, cello, horn and flute by Fernand Halphen, Jewish composer and patron, who died for France in 1917.

Pupil of Gabriel Fauré and Jules Massenet, laureate of the Second Grand Prize of Rome in 1896, Fernand Halphen (1872 – 1917) is the author of a rich repertoire of 150 pieces, among them a symphony, an orchestral suite, a ballet: Le Réveil du Faune and many other melodies. He got also very interested in chamber music, including in particular a sonata for violin and piano, a string trio and quartet. He also composed several scores for organ and some sacred music. Two of his psalms are still played in the synagogues. In 2005, the Foundation of French Judaism had the privilege to receive the archives from the descendants of Fernand Halphen, within the framework of the program Musical Heritage of French Jews. The inventory of this archive collection allowed us to bring to light many of Fernand Halphen’s compositions, among them, many unpublished manuscripts. Subsequently the idea came to make to make a musical album dedicated to the work of this unfairly forgotten composer. This act of musical restitution was also made doubly important by offering the possibility to study the contribution of Judaism to the French musical heritage during the Third Republic (1870 – 1940).

Played by talented executors, the work of Fernand Halphen,full of poetry, lives again today, for the pleasure of our ears… 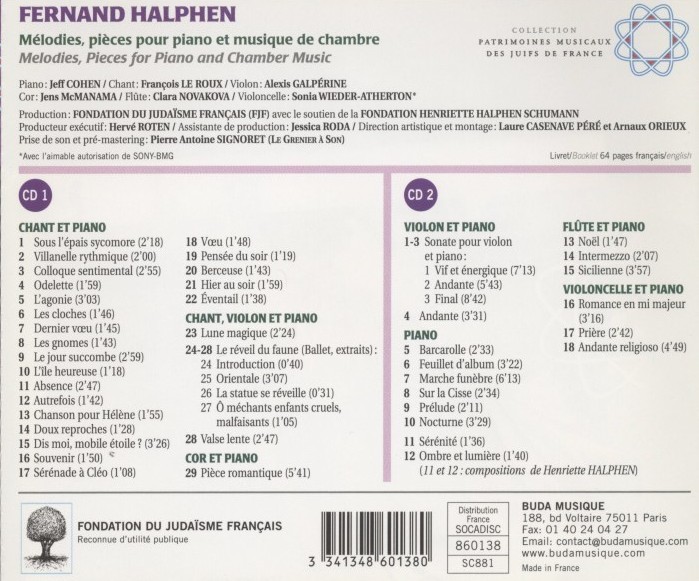