Arriving mysteriously by post on January 24, 2022, this collection of 42 manuscript scores from the 1920s from the former USSR is unique

These scores, written by the hand of a Russian copyist (as evidenced by the use of Cyrillic in several song titles), contain mainly Yiddish folk songs, composed among others by Joel Engel or Moshe Milner (Main harz tsugeiht in mir, A dudke…) and Hebrew songs (Ani hadal, Modeh ani…). There is also an original arrangement of the Zionist hymn Hatikva, signed by Alberto Hemsi with the place and date of composition: Smyrna, 1919.

Beyond the exceptional quality of these scores, which crossed the 20th century and travelled thousands of kilometres before arriving at the European Institute of Jewish Music, it is the way in which these documents came to us that surprised us the most. Indeed, one morning we opened our mailbox and discovered a box containing dozens of pages of handwritten scores. Written in Latin and Cyrillic characters, we quickly realised that most of them were Yiddish songs. On many of the pages, a Slavic-sounding name came up regularly. But besides that, there was nothing, no word or message wishing us good reception, or explaining the origin of the scores. There was only an initial, a name and the address of the sender. So we put on our detective headgear, took out the magnifying glass and pipe, and began our investigation. Where could these scores have come from?

We are fortunate to be connected to the whole world today, and with the help of social networks we were able to find our mysterious sender. A certain Bernard Peyrotte, manager of the Arioso music bookstore on rue de Rome in Paris. While cleaning out his cellar, which was full of sheet music, he came across a box containing our beautiful manuscripts. With good sense and knowledge of the European Institute of Jewish Music, he sent us the documents, knowing that this was certainly the best place to preserve them and make them accessible. 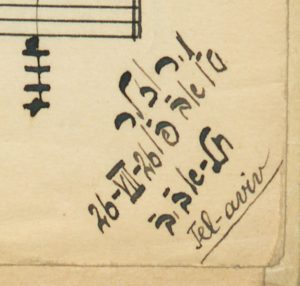 Contacted by telephone, he told us that he unfortunately knew nothing about these scores that someone had given him 10 or 20 years ago.

The investigation was therefore continuing…

Thanks to social networks, we were able to talk to some of the most prominent scholars of Jewish, and particularly Ashkenazi, folklore in the United States. After numerous exchanges and the sending of score excerpts, we were able to deduce that most of the scores were non-autograph works by Joel Engel, sometimes called “the true founding father of the modern Jewish music revival”.

The investigation is therefore well advanced, but not sealed. Indeed, several questions remain unresolved to this day. Who transcribed these scores? They undoubtedly date from Joel Engel’s time, but the handwriting does not resemble his own. Was it one of his friends or colleagues, an admirer or musician? And how did they get to Paris? Who deposited them in this music bookshop? The mystery remains. But from now on, these scores are in a safe place, digitised, stored and accessible on our online catalogue.